FyFa researcher awarded the VR grant in medicine and health 2022 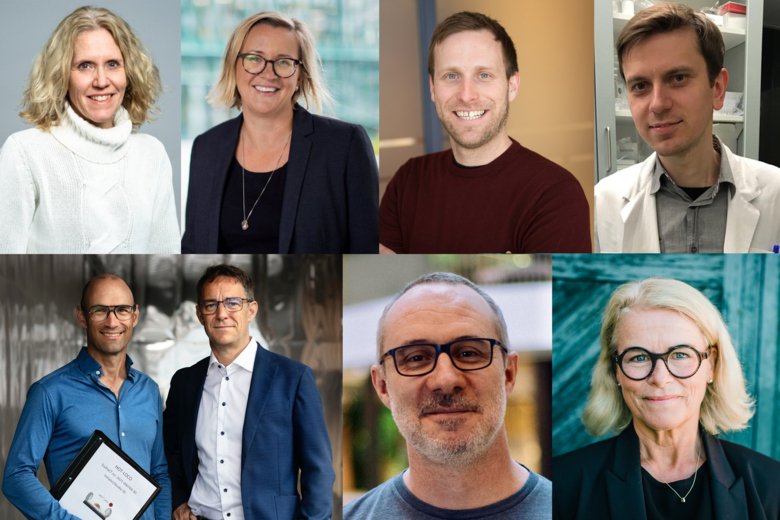 The Swedish Research Council (VR) awards seven researchers at the Department of Physiology and Pharmacology (FyFa) grants for a total amount of SEK 33,600,000.

The project grants went to the following researchers at FyFa

"I have been interested in how insulin sensitivity is regulated for over 25 years, I and many in the field have focused on how changes in mRNA expression affect how insulin works. There is a growing realization that non-coding transcripts, that is, parts of the genome that code for RNA but which then do not result in proteins, are approximately 100 times as numerous as those that code for protein. Interest in how these can affect different physiological processes has increased. My VR project aims to understand the regulation and function of non-coding RNA in relation to insulin sensitivity", says Anna Krook.

In this project, we want to start answering the question what causes the muscle weakness and lack of energy that occurs in connection with several common diseases such as breast cancer, rheumatoid arthritis, and cardiovascular disease, and in connection with normal aging.

"Muscle weakness and lack of stamina hinder the possibility of a healthy life and can also reduce the individual's ability to work, and independence as everyday activities require more effort. In addition, muscle weakness is a contributing cause of long-term sick leave and overall, a contributing factor to reduced quality of life. Currently, there are no effective pharmacological methods to improve muscle function. In this project we will include multiple diseases (rheumatoid arthritis, breast cancer and peripheral vascular disease) to elucidate common molecular signatures that drive disease-induced muscle weakness. We will also include an exercise intervention to identify new target molecules that can be used as a foundation in the development of new approaches to improve muscle function for people afflicted with muscle weakness", says Johanna Lanner.

The project's purpose is to treat patients with post-covid (long-covid), patients with residual problems after covid infection from the year 2020. There is currently no treatment for these patients and a number of the patients are on full- or part-time sick leave due to their long-covid.

"We are conducting a randomized drug trial where the treatment is hyperbaric oxygen treatment in a pressure chamber. Patients with long-term covid are randomized to placebo treatment or to "real" treatment with oxygen and receive ten treatments. In order to understand the disease mechanisms and how the pressure chamber treatment affects, we take blood samples and carry out various physiological tests before and after the treatment series. Primarily, we do this because our hypothesis is that the treatment can cure long-covid. Secondly, we want to find out and explain the mechanisms, but also try to see if it is possible to predict which patients will have the best effect", says Peter Lindholm.

This project is about nonalcoholic fatty liver disease (NAFLD), which is estimated to affect up to 1 in every 3 adults in industrialized countries and 70-80% of patients with obesity and diabetes. The milder stage of the disease, hepatic steatosis (at least 5% fat accumulation within liver), is often asymptomatic and undiagnosed.

"Over 30% of these patients progress to nonalcoholic steatohepatitis (NASH), characterized by progressive liver inflammation and fibrosis. NASH impairs liver function and is a risk factor for cardiovascular disease, cirrhosis, and liver cancer. 30-50% of patients living with obesity and diabetes develop NASH. Currently, there are no specific pharmacological treatments or biomarkers for NASH. We aim to better understand the molecular mechanisms underlying NAFLD/NASH so we can help early diagnostic and monitor disease/treatment progression. We expect that our findings may pave the way for future NAFLD/NASH drug development", says Jorge Ruas.

Polycystic ovary syndrome (PCOS) is the leading cause of female infertility and linked to type-2 diabetes and endometrial cancer. Progress in managing the disorder is hindered by a lack of insight into the underlying mechanisms. We know that male hormones play a key role and that PCOS runs in families. Recently we made the discovery that prenatal androgen-induced PCOS-like traits in female and male mice are passed down across multiple generations. Thus, growing evidence suggests that genetic and epigenetic mechanisms act in concert in complex traits as PCOS.

"Yet fundamental questions remain which will be addressed is what are the cell-type-specific epigenetic and transcriptomic disease signatures and signaling pathways in PCOS endometrium and adipose tissue? Can such perturbations be reversed? And what are the key triggers and molecular pathways that drive transmission of PCOS in the absence of PCOS-associated gene variants? Can germ cells drive transmission in the absence of direct intrauterine effects? If so, can PCOS be transmitted to future generations also by sons? We will integrate human and mouse studies with state-of-the-art molecular techniques to answer these questions. Hopefully, the novel insights that the proposed projects will yield into PCOS etiology and pathophysiology will have several important translational implications that could shape how PCOS, and associated comorbidities is managed. The long-term goal is to give targeted treatment and to predict response to treatment in both women and men", says Elisabet Stener-Victorin.

Pain is a common feature of various cancers. Cancer cells actively secrete factors promoting the neuronal infiltration of tumors. Stopping the electrical signals of tumor-infiltrating neurons helps decrease tumor growth, but the specific means through which neurons regulate cancer cell survival have yet to be determined.

"I discovered that cancer cells drive significant changes in the gene expression profiles of tumor-infiltrating noxious-detecting neurons. I now hypothesize that cancer cells sustain their growth and survival by exploiting neuro-immunity. Overall, this proposal will uncover how tumor-innervating nociceptors, typically considered bystanders, control malignant cells' immune escape behaviors and their resistance to therapy. It represents the first attempt to amplify the immune system's capacity to fight cancer cells by harnessing the nervous and immune systems’ interplay. It will highlight a novel strategy to safeguard the host immunosurveillance, focussing on silencing tumor-innervating nociceptors. The role played by tumor neo-innervation may be of similar importance to oncology as the one now appreciated for neo-angiogenesis", says Sebastien Talbot.

The establishment grant went to the following researcher at FyFa

Blood cancers are a diverse group of diseases with an overall prevalence of over 1.2 mln worldwide. These malignancies have clear unmet therapeutic potential. To this end, B-cell associated cancer forms, including non-Hodgkin lymphoma, can serve as a society- and industry-relevant disease model. There, patients are currently treated with chemotherapy, immunotherapy with monoclonal antibodies or targeted therapy with inhibitors but even for patients treated with best-of-care, the two-year event-free survival rate is still only 57%. Importantly, none of the medications, either already marketed or in the pipeline, target GPCRs.

"My scientific career has been linked to G protein-coupled receptors (GPCRs). These membrane proteins regulate multiple intracellular signalling pathways and they are also the largest group of drug targets. In my research, I plan to focus on orphan GPCRs – understudied receptors for which endogenous ligands have not been identified or signalling paradigms have not been fully understood. I want my research to have a translational aspect, and initially, I will focus on the understanding role of orphan GPCRs in blood cancers. I have already identified a number of orphan GPCRs, which are either overexpressed or specifically mutated in cancers of lymphoid or myeloid origin. In my studies, I will use a combination of in vitro (e.g. bioluminescence resonance energy transfer) and in silico (e.g. virtual screening and all-atom molecular dynamics simulations) techniques to analyze both how these GPCRs act on the molecular level but also how their impact cell phenotype. As such, my overall goal is to obtain a holistic view of the role of these receptors in health and disease, with the ultimate aim to support drug development and providing new medications", says Pawel Kozielewicz.