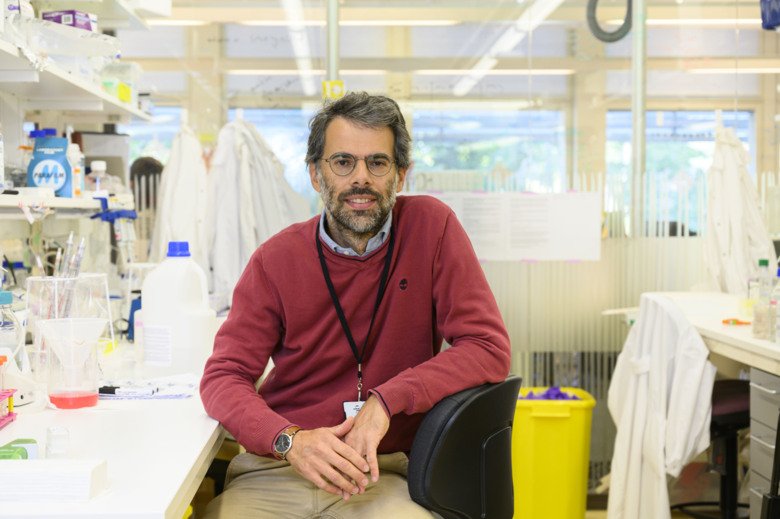 Nicola Crosetto, one of the main authors of the paper, tell us about the most important results of your study.

In this study, we describe a method - FRET-FISH - for measuring the extent of chromatin compaction (i.e., the amount of DNA that is packed at a given volume) at specific genomic locations in single cells, using a combination of two well-established microscopy methods: fluorescence in situ hybridization (FISH) and fluorescence resonance energy transfer (FRET).

So far, it is not possible to measure chromatin compaction in specific genomic regions using microscopy, thus our FRET-FISH method represents the first solution toward this goal.

Chromatin compaction is crucial for gene expression regulation and loss of proper gene regulation can cause major diseases such as cancer. Therefore, having a tool that can be used to study chromatin compaction at genes implicated in human diseases, such as cancer-associated genes, opens new possibilities to understand the mechanisms responsible for gene expression deregulation in disease.

How can this new knowledge contribute to improving human health?

As said, our new method could be used, for example, to investigate how chromatin compaction changes at key cancer-related genes during the process of carcinogenesis or in cancer cells exposed to drugs that modify the compaction of chromatin in the cell nucleus. We also envision that one day, FRET-FISH might be used as an early diagnostics tool to probe for changes in chromatin compaction in normal cells that signal a high risk of transformation into cancer cells.

How did you conduct the study?

The idea of FRET-FISH was initially conceived by Ana Mota, a PhD student in our research group, who was interested in looking into the fine architecture of chromatin under the light microscope. Despite the idea being relatively simple, Ana had to go through many trial-and-error cycles until the method was sufficiently robust and gave reproducible results. Once we felt confident that FRET-FISH was indeed able to detect differences in chromatin compaction in a reproducible fashion, we began using it to explore chromatin compaction in different contexts. For example, we used FRET-FISH to study how chromatin compaction at specific genes changes as cells proliferate or when cells are exposed to drugs that change the compaction of chromatin throughout the nucleus.

Overall, this was not an easy journey, but certainly a rich learning experience for everyone involved in the project!

What is the next step in your research?

Our lab is primarily interested in understanding how DNA is folded in the cell nucleus and how the genome's three-dimensional (3D) organization controls gene expression and influences the formation of potentially pathogenic mutations. FRET-FISH is a powerful add-on to the toolkit that we already have to study the 3D genome in different cell and tissue types. We anticipate that further developments of the method will increase the number of DNA loci that can be visualized simultaneously, allowing us to measure chromatin compaction at multiple disease-related genes in the same cell.

Read the article in Nature here