Dopamine regulates synchronicity in the activity of striatal neurons

Researchers from Karolinska Institutet and the University of California have uncovered the role of a polysynaptic pathway that links cholinergic neurons together. The study was recently published in Nature Communications. 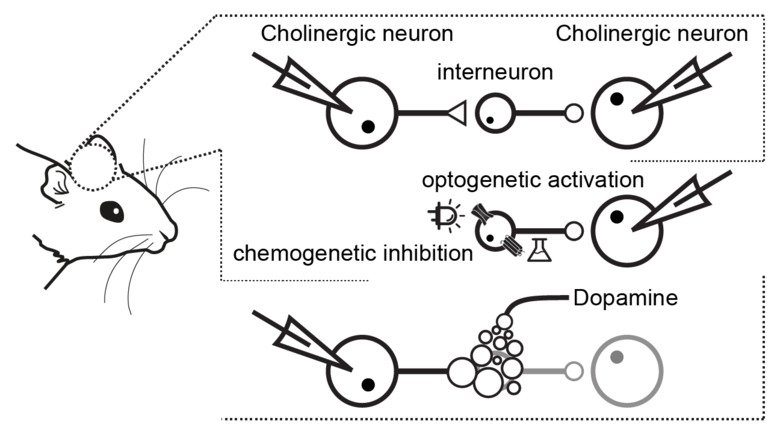 Caption:
Cholinergic neurons in the striatum inhibit each other via TH-interneurons. Dorst and colleagues used patch-clamp recordings, optogenetics, and chemogenetics, to study the pathway and its regulation by dopamine. Image: Matthijs Dorst

Cholinergic neurons are instrumental in regulating activity in in the Striatum. Their acetylcholine interacts with dopamine to create just the right balance for movement, learning and action selection. A key feature of these neurons is their ability to work together in a synchronous fashion, vital for proper sensory and motor functions. How these neurons coordinate so well remains unclear.

"In this study, we uncover the role of a polysynaptic pathway that links cholinergic neurons together. By recording the electrical activity from neighboring neurons, combined with optogenetic and chemogenetic methods, we found the intermediate neurons involved in this pathway", says Gilad Silberberg, Professor at the Department of Neuroscience at Karolinska Institutet, and corresponding author of the study.

"Moreover, we discovered that dopamine can silence the communication between cholinergic neurons, providing a novel mode of interaction between the cholinergic and dopaminergic systems", he continues.

It is well known that Parkinson’s disease results in a lack of dopamine in the striatum. The recent findings explain why, under such conditions, the cholinergic neurons become overly synchronized and may exacerbate the typical parkinsonian symptoms.