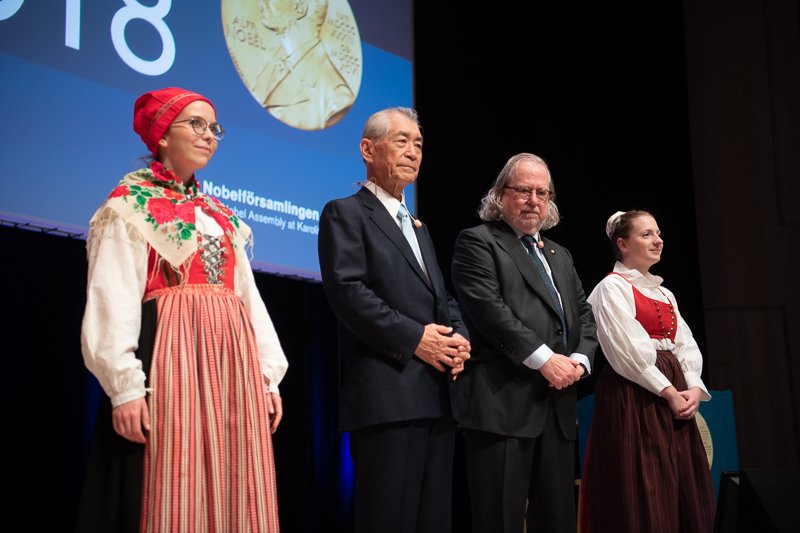 The Nobel Lectures held by the laureates of the 2018 Nobel Prize in Physiology or Medicine saw the Erling Persson Hall in Aula Medica at Karolinska Institutet filled to the brim. In addition to 1,000 audience members in the hall, people around the world were able to watch the live broadcast when James P. Allison and Tasuku Honjo talked about their research, the results of which have led to the ground-breaking immune checkpoint therapy for cancer treatment.

The grey and drizzly December weather did not prevent expectant students and others from forming a queue that stretched down Solnavägen for a little over an hour before the Nobel Lectures in Physiology or Medicine began this year.

Karolinska Institutet’s (KI) President Ole Petter Ottersen gave a welcoming speech and emphasised that tonight is a celebration of research that is about testing boundaries. He thanked the Laureates for their discoveries, after which Edvard Smith, KI Professor and member of the Nobel Committee, presented the Laureates in more depth with an introduction that provided both a personal and professional background.

No biology without Darwin

Smith spoke about James P. Allison, born in the United States in 1948, with an early interest in research and dissecting frogs, but with no inclination to follow in his father’s footsteps and become a physician. Allison was in jeopardy of not graduating high school after protesting his teacher’s decision not to teach evolution in class, because biology without Darwin was an impossibility. In the end, it was resolved through a correspondence course from a university, and Allison was able to proceed to higher studies and basic research within immunology.

James P. Allison dedicated his lecture to all students, research colleagues, physicians and patients with whom he has worked.

He spoke of how during the 1990s he had studied CTLA-4, a protein on the surface of the T cells. Early on, he had had an idea that it should be possible to deceive the body’s own immune system in order to attack tumour cells.

Researchers at the time knew that CTLA-4 worked as one of the T cells’ brake pedals, and Allison developed a way to block CTLA-4 through treatment with an antibody that binds to the CTLA-4 protein. The T cells could then be released and thereby fight tumour cells.

In 1994, Allison conducted the first experiment on mice, and in 2010 a study was published that showed good results in patients with disseminated malignant melanoma, or skin cancer.

Among other things, Allison highlighted one case with a woman who was severely ill from skin cancer and who participated in a clinical study in 2001. No traditional cancer treatment had helped, and Allison shows a computed tomography image of her lungs which were full of metastases, or daughter tumours. The woman received a single antibody injection in the study.

“At that point, the survival time after being diagnosed with metastatic malignant melanoma was eleven months, essentially a death sentence. In this computed tomography image ten years later we can see that all metastases in the woman’s lungs are gone. The woman is still cancer-free almost nineteen years later, it’s amazing,” says James P. Allison.

The school thought his questions were too difficult

Edvard Smith continued to introduce the second Nobel Laureate, Tasuku Honjo, born 1942, who grew up in Japan in difficult conditions surrounding World War II, yet still managed to educate himself. Like Allison, his time as a student at school was not without its complications. The teachers did not think that he was a good, obedient student because he often asked questions that were too difficult and found the school books to be too easy.

Tasuku Honjo likes music, museums and painting, tells Smith. He is also a devoted practitioner of tennis, baseball, basketball, table tennis and golf, with a handicap of 14. Every year he plays golf with the former Nobel Laureate from 2012, Shinya Yamanaka.

To start with, Tasuku Honjo spoke about his father who was a surgeon and described his mother as his beautiful, warm-hearted guardian goddess. It was when the mother gave Honjo a biography of Hideyo Noguchi, a prominent physician and researcher in bacteriology and serology, that he decided to become a physician and then a researcher in immunology.

“It’s a stroke of luck that people are fortunate enough to have an immune system with acquired immunity. Otherwise, cancer immunotherapy would have been an impossibility,” says Tasuku Honjo.

Discovery of a protein with the same type of brake pedal

In parallel with James P. Allison, Tasuku Honjo discovered that another protein, PD-1, which is also found on the surface of T cells, also acted as a brake pedal for the immune system. Animal experiments showed that blocking PD-1 was another possible strategy for cancer therapy.

The strategy proved to be very effective during clinical trials in 2012 and can be used to treat, for example, lung cancer, renal cancer, lymphoma and skin cancer. Additionally, a combination of blocking both PD-1 and CTLA-4 in skin cancer has been shown to have an even greater effect.

As with Allison, Honjo referred to several cases where patients who had been close to death due to severe cancer had been cured using antibody therapy. Chart after chart depicts the levelling out of curves with increasing long-term survival.

Tasuku Honjo described the arduous journey undertaken to understand the function of PD-1 and how the knowledge can be used. He compared the mechanisms of being able to brake and accelerate the immune system with the same functions in a car. At the same time, it is a tightrope act that must be performed when treating cancer with this method.

“If you accelerate too much during cancer treatment, there is a risk that the body will have an autoimmune reaction and begin attacking itself,” says Tasuku Honjo.

He proceeded to talk about the paradigm shift now taking place within cancer therapy. In addition to surgery, radiotherapy and chemotherapy, immunotherapy has been established as a fourth cornerstone in cancer treatment. The benefits, among other things, are that normal cells are not affected by the method, it is effective for many types of cancer (and more than 1,000 clinical trials are ongoing around the world) and the effect is lasting even after the treatment of patients has been discontinued.

“Cancer will not completely disappear, but it can be controlled using immunotherapy, and it may become one of the many other chronic diseases that you can live with,” says Tasuku Honjo, who finished by humbly thanking all he had collaborated with through the years.