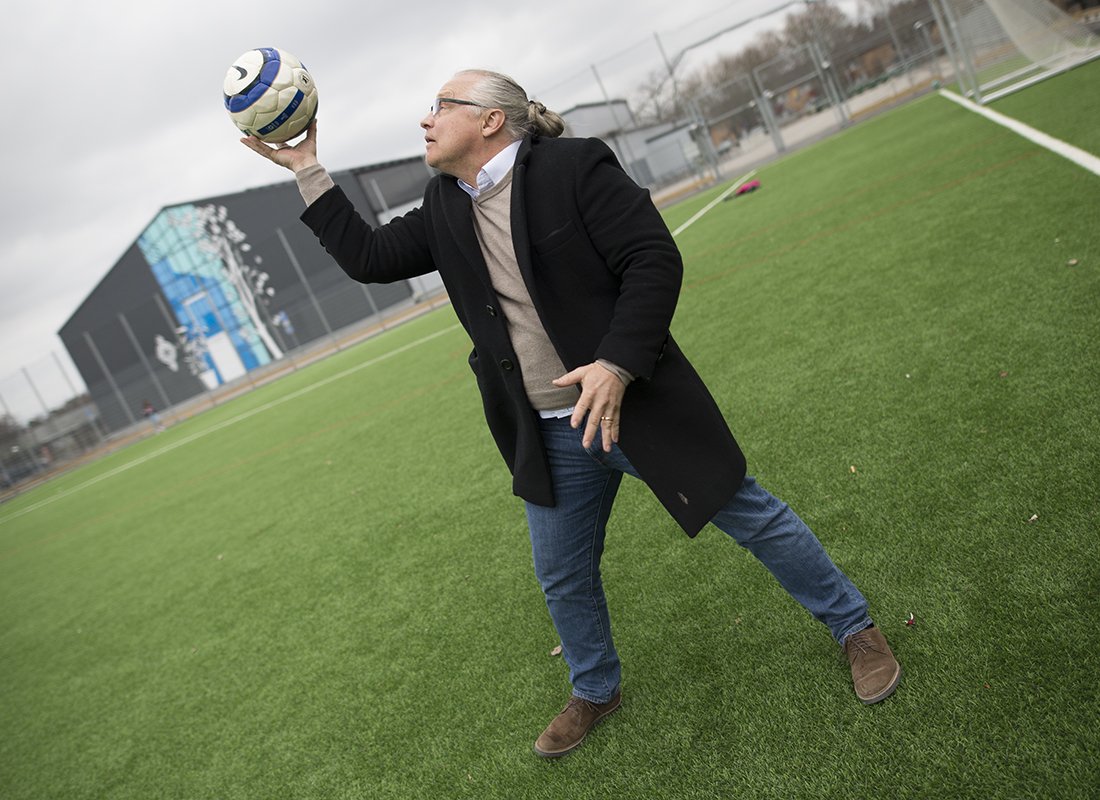 The KI PhD student and psychologist Torbjörn Vestberg has attracted considerable attention for his new book “Hjärnboll” [Brainball] , which he co-authored with the KI researcher Predrag Petrovic and the journalist Thomas Lerner. The book presents reasoning and puts forward hypotheses and knowledge concerning which functions in the frontal lobe are essential in order to become a really successful football player – factors that are of particular interest in the weeks leading up to the World Cup tournament in Russia.

It was not a foregone conclusion that Torbjörn Vestberg would become a psychologist, having previously been a business developer and a Baptist pastor. He originally comes from Norrköping, but it was during his six years as a psychologist in China that he became interested in how the brain functions. In China, his work included developing requirements profiles for managers in the world of trade and industry, and it turned out that in China they conducted measurements differently to how it is done in Sweden.

– I started thinking about what it actually was that we were measuring – how relevant is it to look at how introverted or extroverted a person is when you’re looking for manager material? It actually says nothing about how successful a person can be as a manager, says Torbjörn.

He began his training in psychology after the age of 40. He has previously worked at a recording company that specialised in classical music, and before that he was a pastor in the Baptist church, having studied theology.

– It might sound a bit exotic, but you have to remember that the free churches had a lot of followers in Sweden when I was growing up,” says Torbjörn. One of the driving forces for writing the book was actually to show that you can change track and do something sensible even as an old man.

The first impulse to investigate how people react to different stimuli came when Torbjörn Vestberg did his practical work as a psychology student at Karolinska University Hospital. He was struck by how people with diagnoses of psychosis, for example, were often worse at dealing with external stimuli rationally, if at all. He started thinking about what group of people could be considered the direct opposite and came up with top-class football players. They are forced to make decisions at very high speeds while being faced with very great demands to be able to adapt to an environment that is changing at breakneck speed – and they need to make the “right” decision in order to be successful. These are all abilities that are described as executive.

– The more successful the player, the better his executive capacity, says Torbjörn.

He has confirmed that there is a marked difference if you compare players in the Swedish premier league with players in Division one – in other words, two levels down in the series system. He has also tested the football players Andrés Iniesta and Xavi of Barcelona, and they scored even higher. But even the division one players had a higher executive capacity than the normal population.

Torbjörn Vestberg is currently devoting his time to a study in which he, together with associate professor Predrag Petrovic, is testing a large group of elite players in order to see how executive functions interact with physical form, technique, mental fortitude, social skills and experience.

The specific benefit of the research may be a better understanding of how the brain’s capacity in relation to executive functions drives behaviour in a number of different contexts and professions. It could be a matter of functional impairment as well as above-average ability.

With regard to his academic career, Torbjörn Vestberg is in no rush: he intends to complete his doctorate before his sixtieth birthday next autumn – but until then it’s time for the football World Cup.

What do you think are the chances for the Swedish team?
– In general, I don’t have great hopes for Sweden – there’s usually too much focus on everyone doing well, and I don’t believe that’s a factor for success. I don’t actually like watching football on TV – I’m usually most interested in the players who don’t have the ball, and they’re not usually shown on TV,” says Torbjörn.

How the tests work

The tests are tried and tested from previous ADHD investigations and from the diagnosis of concussion. The tests are completed using both pen and paper and computers, and they indicate the capacity for, among other things, concentration, cognitive flexibility, general speed, impulse control, working memory and creativity. The tests measure both speed and accuracy, though speed is prioritised. The basis for the book’s research is based on twenty studies that have developed over the last seven years concerning executive functions and performance in sport and working life.