A Train of Innovation stops at KI 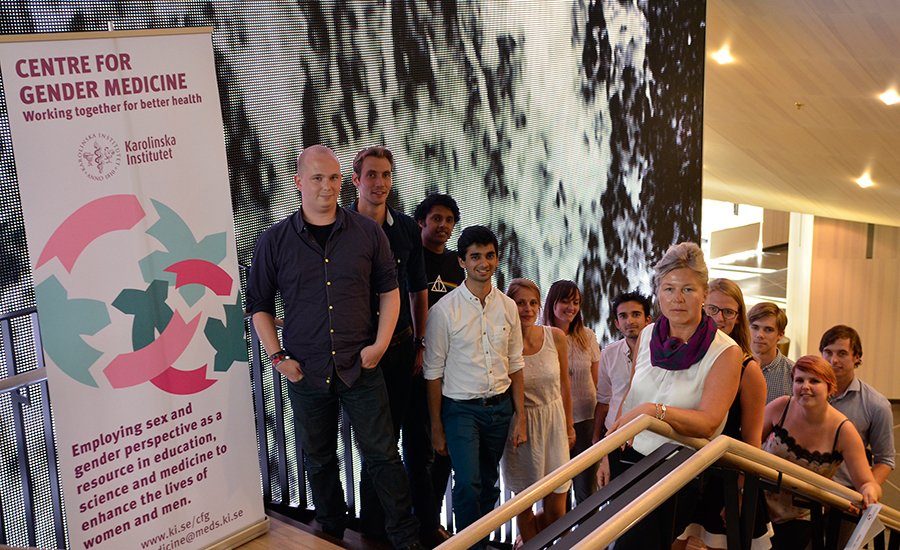 An international team of students, managers and engineers arrived in Stockholm to solve a healthcare challenge proposed by the Centre for Gender Medicine in Karolinska Institutet.

When Thijs Sondag, entrepreneur from The Netherlands, and Lisa-Marie Larisch, the Think Train coordinator in Sweden, received a letter from the CfGM, they felt excited and honored: theirThink Train had already stopped in other stations in Europe, but a collaboration with a prestigious University like Karolinska Institutet would be an unprecedented experience. Would the Train being able to handle the task?

“We ask you to help us creating a strategy to achieve the visions of the CfGM: engage public, doctors and researchers on being sensitive to the gender and sex issues as a meaning to improve healthcare”.

The Think Train is a team of creative students, designers, managers and engineers committed to promote and facilitate the way Europeans interact with the healthcare. Internationally acknowledge as real “change-maker”, this summer the Train visited The Netherlands, United Kingdom and Sweden to responds to the calls of different healthcare organisations, and Karolinska Institutet was on list.

The Train gives itself breath-taking deadlines: the team will use 2 days to thoughtfully understand the nature of the problem, and just 4 days to work out the solution.

“We call it the 99-hours project” says Thijs, today’s Captain of the Think Train, who we reached in The Netherlands after his trip in Stockholm, “we know it works because we have designed a special strategy to tackle problems. Our strategy is inspired by the Start-Up Weekends, events where teams build a product in just 3 days”.

On the 7th day, the Think Train presents its results the their clients and move on to the next destination. But what is the hardest part? Coming out with an innovative idea or the developing process?

A train of ideas

“By far, the draft of ideas is the hardest part” says Thijs. “We give ourselves two whole days just to create a solid interaction with the CfGM and to understand their needs. Communicate clearly with your client is imperative for success. The next phase, where we actually pick one idea and create the product, is relative straightforward”.

But how can a team successfully accomplish a challenge in just 4 days? Already in March 2013, Thijs made the pilot case that proved the concept works. At the time, in The Netherlands there was a lot of discussion about the prices that are being charged by different hospitals for the same treatments. Citizens suspected of extreme prices differences between healthcare providers. Together with few other talents, Thijs improved the transparency of the system by creating a website that compares the costs of the top-100 treatments in The Netherlands, helping citizens to spot providers that offer the best price. In one week, the concept was born, tested and up-and-running. The project hit the national news: “I think our projects are popular because we use innovative ideas to empower people” comments Thijs.

Karolina Kublickiene, who wanted to get a ticket for the Train since she learned about the team, is still surprised by the ability of the young talents to draft innovative ideas and to translate them into a concrete, tangible accomplishment. “Their way of working and collaborating demonstrates that any problem can be solved if you have an interdisciplinary team” says Karolina, “That’s how you produce innovation”.

And surely innovation was born. At the end of the 99-hours, the Train provided the CfGM with, among other ideas, the GenderedReaction.com, the interactive website that report about side effects of drugs split between female and male. We already talked about the website in this space.

Beside CfGM, the Train has successfully addressed other healthcare challenges, especially for the industries. But how do they manage to assemble a team and give an innovative product in just 4 days?

“To ensure the success of the operation, it is essential to have an interdisciplinary team” continues Thijs. “We ask a medical doctor - or any other expert - to be our main interpreter of the problem we face. Around this person, we associate three other group of experts: designers who put on paper the need of the client, structure the ideas and the objective of the project; developers (IT/producers) who knows how to create the product or the platform we need, and an implementation team that make sure the product gets into the hand of those who needs it”.

Why is the Think Train interested in the healthcare? In the words of Thijs Sondag: “First of all we all share a passion for health and are all interested in the dynamics of a sector that moves billions of euros. Moreover, the European landscape of healthcare is changing: the population is aging and new drugs will be scarce and expensive, with and an increasing cost sector. Though the healthcare is a space that constantly looks for optimization of its limited resources, it is the slowest market in terms of innovation. We want to be the hub that speeds up this transformation process”.

The Think Train will continue to take challenges and finding solutions a bit all over Europe. Make sure to follow their route and meet them in a health challenge near you!