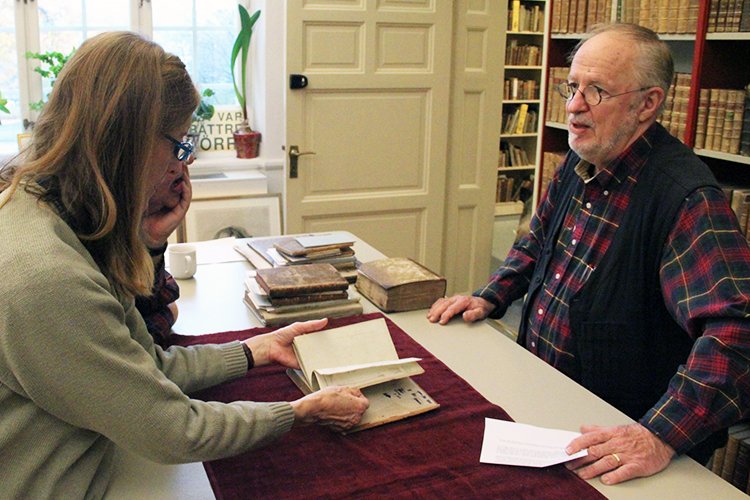 During this fall the Hagströmer Medico-Historical Library at Karolinska Institutet celebrates its 20th birthday, and extra guided tours are being held of the library's antique books and illustrations. The collections have grown steadily over the years, and today the library is well-known and internationally renowned.

The Hagströmer Library in Hagaparken holds approximately 40,000 books, most of which were printed before 1870. Among other works the collection contains ten so-called incunabula, books printed before 1501, when the art of printing was in its infancy. One of the most valuable books is Carl Linnaeus’ personal copy of the first edition of his Systema Naturae, printed in 1735.

“I have had the honour of showing this Swedish national relic and world-famous book to Japanese Emperor Akihito in Tokyo, during the Linnaeus tercentenary celebrations in 2007, and also at the most prominent libraries in the USA,” says Ove Hagelin, the Hagströmer Library’s founder.

The basic idea 20 years ago was to bring together the old book collections from the Swedish Society of Medicine and Karolinska Institutet, but the library has grown over the years. Today many medical libraries have entrusted their collections of old books to the Hagströmer Library. Ove Hagelin’s vision has been, and continues to be, to bring to life these treasures that for centuries have stood unnoticed on library shelves.

Because the books are extremely valuable, the library cannot be permanently open to the public. For this reason, the library arranges guided tours and these have become increasingly popular over the years. Ove Hagelin estimates that about 10,000 people have visited the library. Visitors generally come from KI, associations, societies and foreign universities.

“During tours, visitors have the opportunity to see first editions of medical history’s classics but also the craftsmanship and artistry, which we think is so incredible today, that went into the production of a book in bygone centuries. After every visit it feels as if we’ve peeped through the door to a world that is totally unknown to most people,” Ove Hagelin says.

Limited space used to be a problem that was a constant struggle for the library but this was solved in 2010 when the National Property Board of Sweden offered KI the opportunity to lease the "k-listed" Haga Tingshus building in Solna.

“It was like a gift from Heaven. It’s fantastic to be able to invite people to such a beautiful building where we can display books in a worthy and appropriate setting,” Ove Hagelin continues.

Since a few years back, the library has been dependent on the Friends of the Hagströmer Library association. Doctor and writer Nils Uddenberg, the association’s vice-chair, met Ove Hagelin in 2002 and was fascinated by him as a person ad the unique collections he worked with. Since then he has been a frequent visitor to the library, whose materials he has used for research and inspiration in his writing.

“I was spellbound immediately. All major breakthroughs in research can be seen all around on the walls and it’s a beautiful setting that seduces every visitor,” he says.

Nils Uddenberg emphasises that it is a unique resource for a medical university that gives it a footing in the history of science.
“I hope it will be allowed to remain and that it is given a strong position at KI,” he goes on.

And the library continues to develop, not least through the association’s chair, financier Sven Hagströmer. He repeatedly finances new acquisitions to be kept at the Hagströmer Library, which takes its name from his great-great-great grandfather.

Milestones in the Hagströmer Library’s history

Activities associated with the 20th anniversary