The auditorium was officially opened 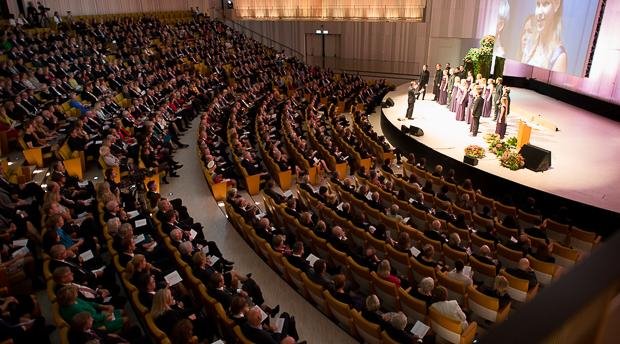 On 11 October, six years after the Erling-Persson Family Foundation’s donation of SEK 350 million, which made the construction of Aula Medica possible, the auditorium was finally officially opened.

Before a packed auditorium and after a full inauguration programme, the foundation’s chairperson, Stefan Persson, symbolically handed over the Aula Medica key to Vice Chancellor Anders Hamsten.

“The key to success is knowing what makes us unique,” said Stefan Persson. “Karolinska Institutet is one of Sweden’s strongest brands with research being conducted of the highest standards, and my wish is to give the university a unique feature – a forum for creative interaction and events.”

In her speech, she mentioned how delightfully ceremonious it felt to be present at the building’s inauguration.

“Aula Medica is Karolinska Institutet’s leading meeting place and part of the enormous phase of development that’s shaping this district of the city,” she said. “When I was growing up, this was countryside; it has since changed enormously during my lifetime and now how motorways, businesses, hospitals, innovations and research.”

She also claimed that Aula Medica was one of the successes of Karolinska Institutet’s Breakthrough for Life fundraising campaign, for which she was the chairperson, and thanked her committee colleagues who had driven the campaign forwards.

She closed by saying that Aula Medica is a clear reminder and a powerful symbol of the research that is being conducted unseen but that will one day become visible.

The evening was spiced up with an entertainment programme that included the Sofia Vocal Ensemble, high-tech airborne acrobatics, trumpet fanfares and opera arias. Karolinska Institutet’s own musical professor, Fredrik Ullén, inaugurated the auditorium’s new Steinway grand piano with a piece by Franz Liszt. The guests were also treated to a brief architectural history of the world’s auditoriums.

“Aula Medica clearly accentuates the university’s presence and is a purpose-designed centre for both science and socialising, and a forum for inspirational discussions at which scientific paradigms are probed and challenged,” said Professor Hamsten. “A generous gift made all this possible.”

He then went on to describe the future of KI and the Hagastaden district, with the world’s most modern university hospital and Biomedicum, the world’s largest and best-equipped research laboratory – close to the patients and for the benefit of human health. Professor Hamsten closed by thanking all who had helped make the realisation of Aula Medica possible.