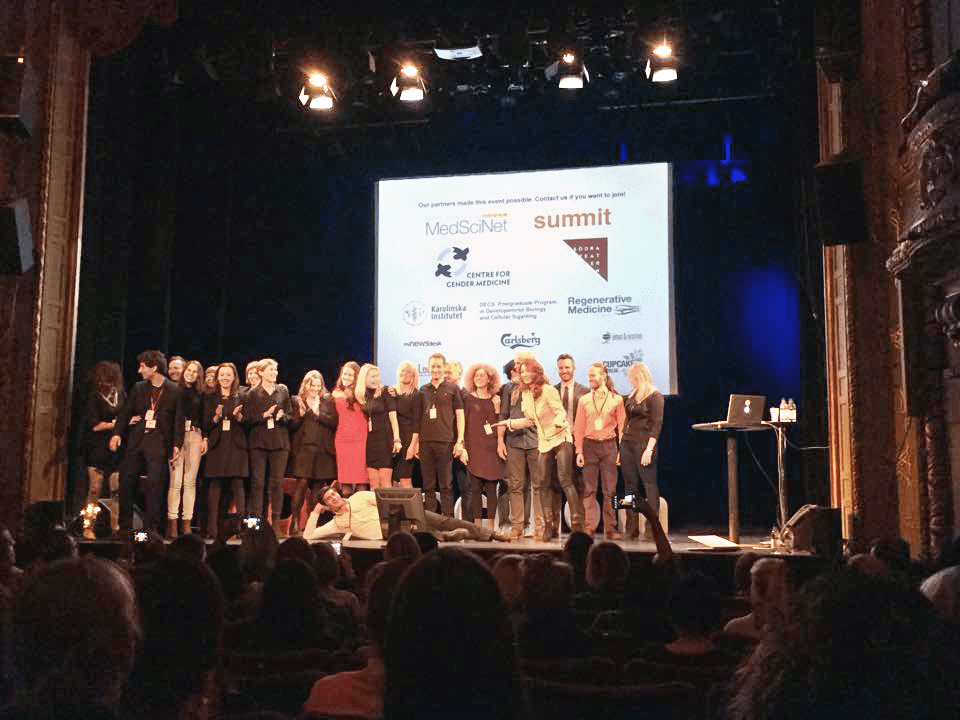 Karolinska Institutet and the Centre for Gender Medicine get a foot in the city to promote diversity through unique TEDx speakers.

On February 16th the Centre for Gender Medicine endorsed the biggest TEDx conference ever hosted in Sweden. The event was hosted by Sabinije von Gaffke, and put together by a team of 15 organisers and more than ten partners, who made this TEDx hitting sold-out 3 weeks ahead its beginning.

With the theme #Differentia, the inspirational conference focused on “the concept of diversity”. How embracing our society’s differences could lead to new and creative solutions to old problems?

A reason for the enormous success of the event - according to the organisers - was the whole spectrum of speakers that had something to say about “thinking differently”. In the beautiful Södra Teatern, in the heart of Stockholm, the 350 attendees were amazed by the groundbreaking stories from entrepreneurs, athletes, professors and other visionaries who harnessed their differences to achieve success.

“There are individuals who understand how to utilize the differences which make up our society, and we want them to inspire generations”

Can we use the diversity present in our society to empower generations? The CfGM has long promoted this type of innovative thinking via numerous initiatives within academia. These efforts have recently been acknowledged as necessary by Prof Anders Gustafsson, Dean of Karolinska doctoral education.

Reaching its highest maturity, the CfGM was ready leave academia and spread ideas the the general public. And the TEDxStockholm team was the best partner to dare with.

“The collaboration with Karolinska Centre for Gender Medicine was very productive” says Jonas Fuks, from the organizing team. “The Centre has help us to bring in our TED the gender perspective for each talk, and make sure we covered a whole variety of topics that all could benefit from ‘Differentia’”.

The Head of the Centre Karolina Kublickiene joined the advisory board, where she helped the volunteer at different level of the organisation: “Working with young enthusiasts is the best I could hope for. The energy of the TEDxStockholm team make you feel you could realise everything. Coaching these people has been a real privilege”.

Among the TEDxDifferentia speakers, Bear Kittay (Burning Man’s adviser) and Doug Lansky (travel freelance and researcher) shared their life experience as community guru and journalist, and how the diversity they encountered empowered their profession. Frank Schuil (CEO & co-founder of Safello) embraces diversity in every single entrepreneurial adventure he undertakes, and his “nose for success” lead him to open the first ATM machine for Bitcoin in Sweden.

But diversity does not always enrich societies, especially when it regards its income. Anna Rosling Rönnlund, entrepreneur and user experience designer, explained how the gap in the income between countries still represent the toughest barrier to education, wealth and health for the people of the world. Together with Prof Hans Rosling, Anna founded the world data-mining phenomena GapMinder, a non-for-profit organisation that disseminates a “fact-base” view of the world, fighting ignorance.

TED talks continued. Jacob Östberg (Professor of Advertising at Stockholm University) focused on the symbolic dimensions of consumption, and how consumers shape society by choosing what to buy. And then Jenny Gardner (Director of UK Trade & Investment at the British Embassy in Stockholm), Maria Ludvigsson (editorialist at Svenska Dagbladet) Paul Vaderlind (mathematician and educator) Shai Dahan (artist) and Yamina Enedahl (free-diving Swedish champion), all inspired the audience with their successful stories.

But diversity can enrich also to the art world. As conference intermezzo, Josh Lenn, Katarina Wahlberg and Veronica Bergström (from International Theater Stockholm) entertained the audience with the art of improvisation, getting inputs from public and the speeches to set the show.

This special event concluded with a gala dinner, which added value to the conference experience. In a space where the audience and the speakers blended together, the interaction and exchange of ideas were explosive. The public were inspired as much as the speakers, who loved to have being given the chance to outreach to their audience so directly.

This successful event brings Karolinska Institutet and the Centre for Gender Medicine closer to the people of Stockholm, to a level never achieved before. We hope that diversity will continue to fuel inspiration, and that it will be disseminated through ideas worth spreading.