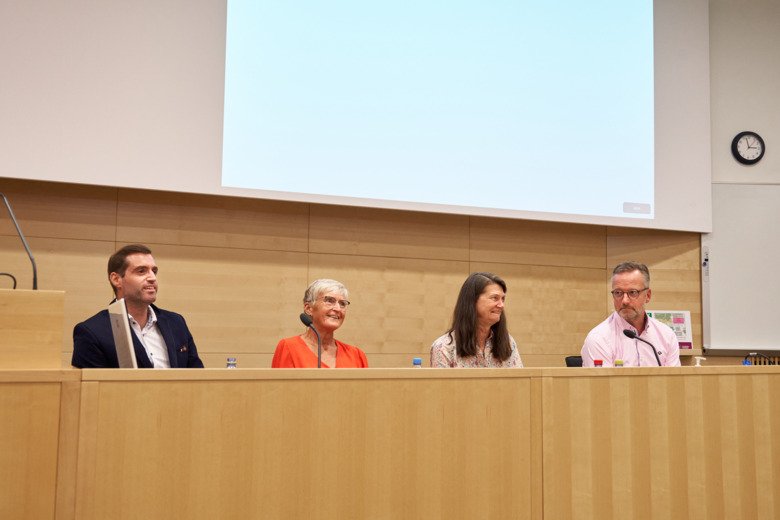 Caption:
Hearing for the election of the Academic Vice President and Vice Chairperson of the Committee for Higher Education. From left to right: Nick Tobin, Maria Hagströmer, Ewa Ehrenborg and Rune Brautaset. Photo: Erik Flyg

The hearing for the election of the Academic Vice President and Vice Chairperson of the Committee for Higher Education included questions about, among other things, skills supply and teaching. The elections opened for voters on 25 August and will run for a week. 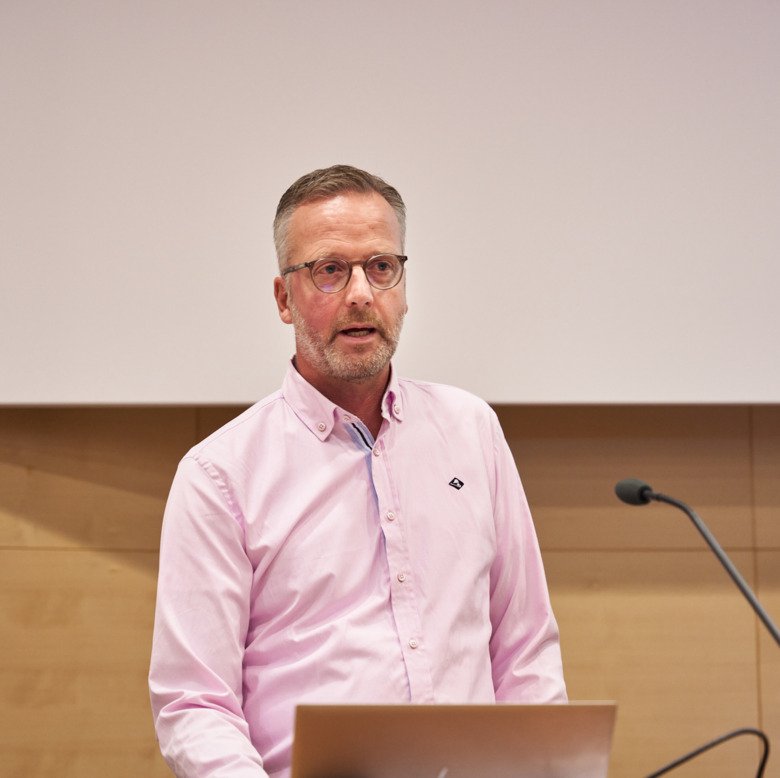 The hearing was opened by Rune Brautaset, current Academic Vice President and Vice Chairperson of the Committee for Higher Education. He highlighted, among other things, the need to strengthen the supply of teachers and the need for more teachers with doctorates.

"We also need to work further on developing a pedagogy that is student-activating, while finding a balance between digital and physical teaching," says Rune Brautaset.

He also stressed the need for a model to make teaching more rewarding. Also, ensuring the availability of premises with an adequate standard of equipment.

"Work placement will continue to be a challenge for a university with clinical training, and today's changing healthcare environment with new players. This applies to both the number of places and the availability of qualified teachers.”

In conclusion, he said that the training’s research linkage needs to be strengthened. 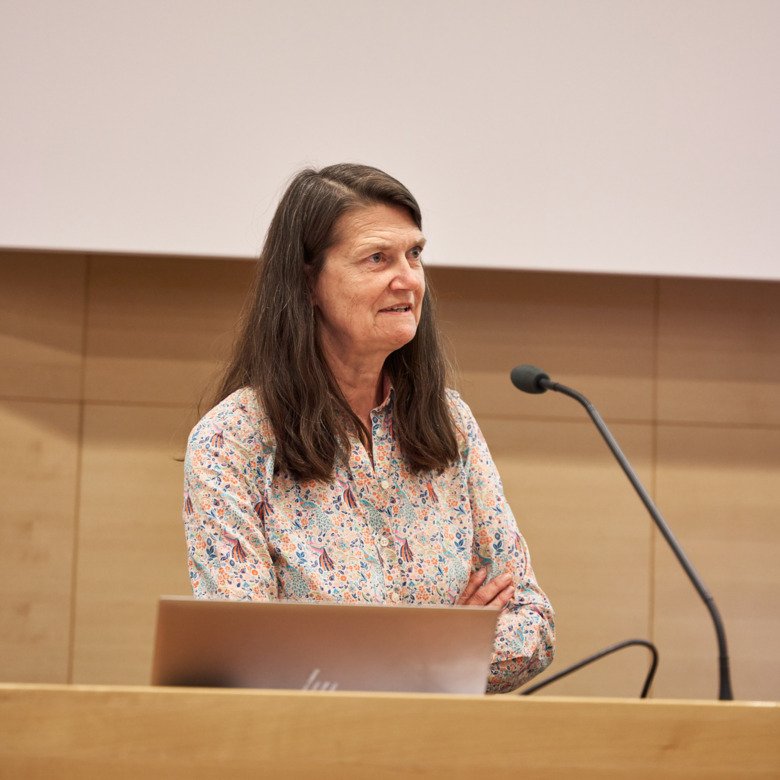 Ewa Ehrenborg began with a presentation of her career and her various assignments. When it comes to tomorrow's challenges, it is important to look at society's need for well-trained employees, she stated.

“We need to prepare our students to face a changing healthcare landscape with more home care, more digital visits and a greater focus on prevention and public health,” says Ewa Ehrenborg.

Recruitment should be based on the needs of education and increase teaching skills, she emphasised, while at the same time raising the credit value of teaching.

Ewa Ehrenborg also wants to review the need for different types of teaching skills and emphasised increased collaboration with municipalities, other universities and the life-science sector and the ability of university health units to provide optimal training.

She also stressed the need for a review of course offerings in collaboration with other universities. 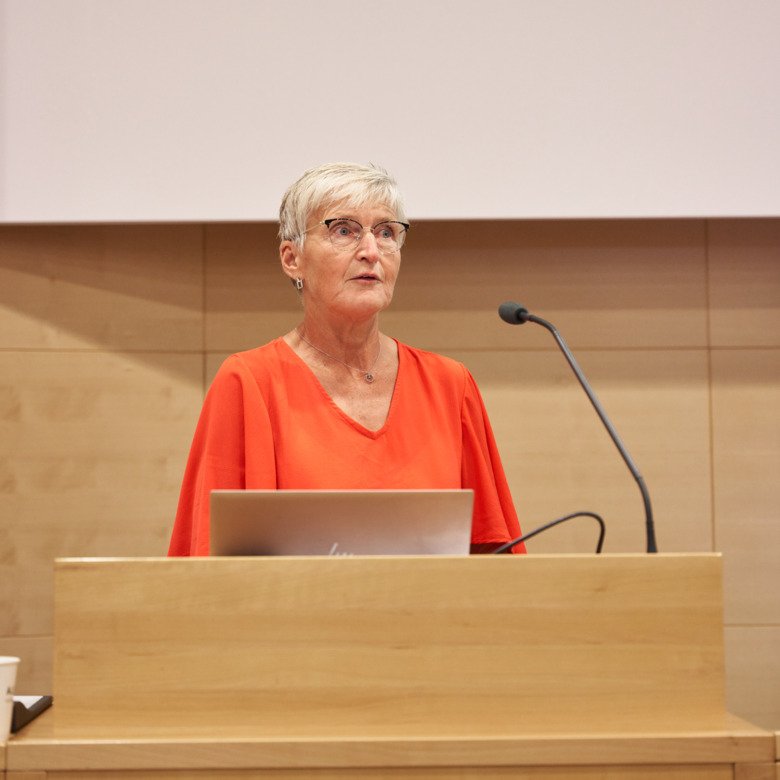 Maria Hagströmer began by pointing out that the candidates shared many views and priorities.

"All programmes at KI must be of high quality and I want to emphasise that this must include all. KI has come a long way, and the KU has worked on many issues, but there is still more to do,” says Maria Hagströmer.

She stressed the importance of more and clearer career paths where teachers can feel seen. Securing the supply of skills is one of the biggest challenges, she emphasised.

“We have an imbalance between faculty who want time for research, and preclinicians who want to teach. Here I have several thoughts and know that efforts are underway.”

Education should be adapted and flexible to the needs of society.

“Collaboration with the region and other universities is key, and we may need to broaden our work placement to include other arenas," says Maria Hagströmer.

Nick Tobin highlighted, among other things, the importance of inspiring upper-secondary school students to pursue science.

"I want us KI teachers to go out to the local upper-secondary schools and teach one to two hours per semester,” says Nick Tobin. 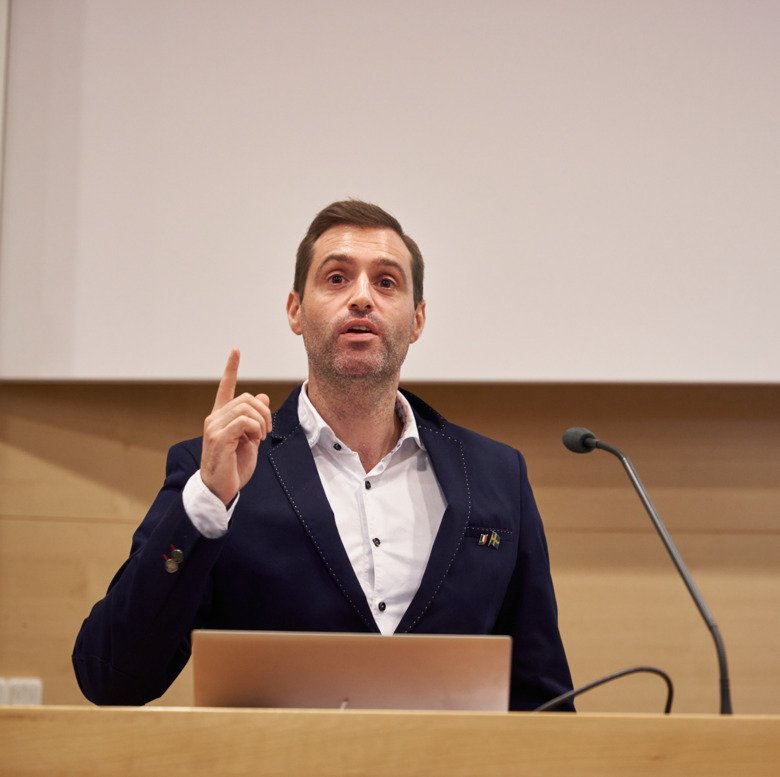 He also said that research and education should be closely linked and that the best researchers should be actively involved in teaching. In addition, he argued that it is important that education is viewed with the same prestige as research.

“Our teachers will be visible on the KI website and in newsletters in the same way as researchers. And we will only give central KI funding to researchers who are actively involved in teaching. As well as emphasising that education can stimulate research.”

The presentations were followed by a Q&A session where the audience asked questions about how the candidates wanted to strengthen and structure the working environment for students, and how they want to increase motivation to become clinical supervisors.

The audience also asked how to motivate teachers and staff to stay within KI. Rune Brautaset argued that different departments have different challenges.

“But an important factor in retaining teachers is offering them time to do research. We have to make sure that the funds we have received for research follow the teaching assignments," says Rune Brautaset.

Ewa Ehrenborg said that this issue requires joint efforts with the departments, heads of department and those responsible for first- and second-cycle education.

"In addition, we need to review our offerings. As a top researcher, it is difficult to get into undergraduate education. For example, we have many people who don't speak Swedish, and that makes clinical training difficult,” says Ewa Ehrenborg.

Both were supported by Maria Hagströmer, who also highlighted the need for joint employment.

"We need, in collaboration with the region, to create joint positions at lecturer level. Today we have high demands on lecturers. Are there perhaps other ways to combine the tasks of working clinically and being a teacher? The working environment also plays a role where we need to make teachers more visible," says Maria Hagströmer.

Nick Tobin highlighted Region Stockholm’s strategy to become one of the world's leading life-science regions by 2025.

"We will lose people to the life-science industry as we will never be able to compete with their salaries. That's why we need to focus on strengthening the ‘we’ feeling by, for example, having the heads of department in each department know everyone better. In addition, the career ladder needs to be seen as a living document that is changing.”

Finally, Nick Tobin raised the issue of a tax cut for researchers, similar to the one that international researchers can enjoy today.

Everyone employed as a teacher or researcher on at least a 50% contract at KI is eligible to vote. All eligible voters will receive an internal email containing a link to a digital voting system for the election in which they are able to vote.

KI's Nomination Assembly has appointed candidates for the election of new academic vice presidents to KI's committees. The Committee for Higher Education is tasked with supporting the Faculty Board through preparation, quality monitoring and implementation in the field of education.

KI's Nomination Assembly has appointed candidates for the election of new academic vice presidents to KI's committees. The Committee for Doctoral Education is tasked with supporting the Faculty Board through preparation, quality monitoring and implementation in the field of doctoral education.