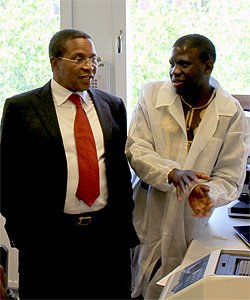 As part of a state visit to Sweden, the president of Tanzania, Jakaya Kikwete, stopped off at Karolinska Institutet, which has a long history of scientific collaboration with his country. The President’s visit to the university took him to a lab for malaria research at MTC.

After visting several departments at Karolinska Institutet, the delegation moved to the Department of Microbiology, Tumour and Cell Biology, where Richard Mwaiswelo, doctoral student at MUHAS who is working on part of his project at KI, demonstrated some of the instruments he uses in his research on the effects of malaria drugs and the development of resistance to them (picture above).

Read more about the visit here