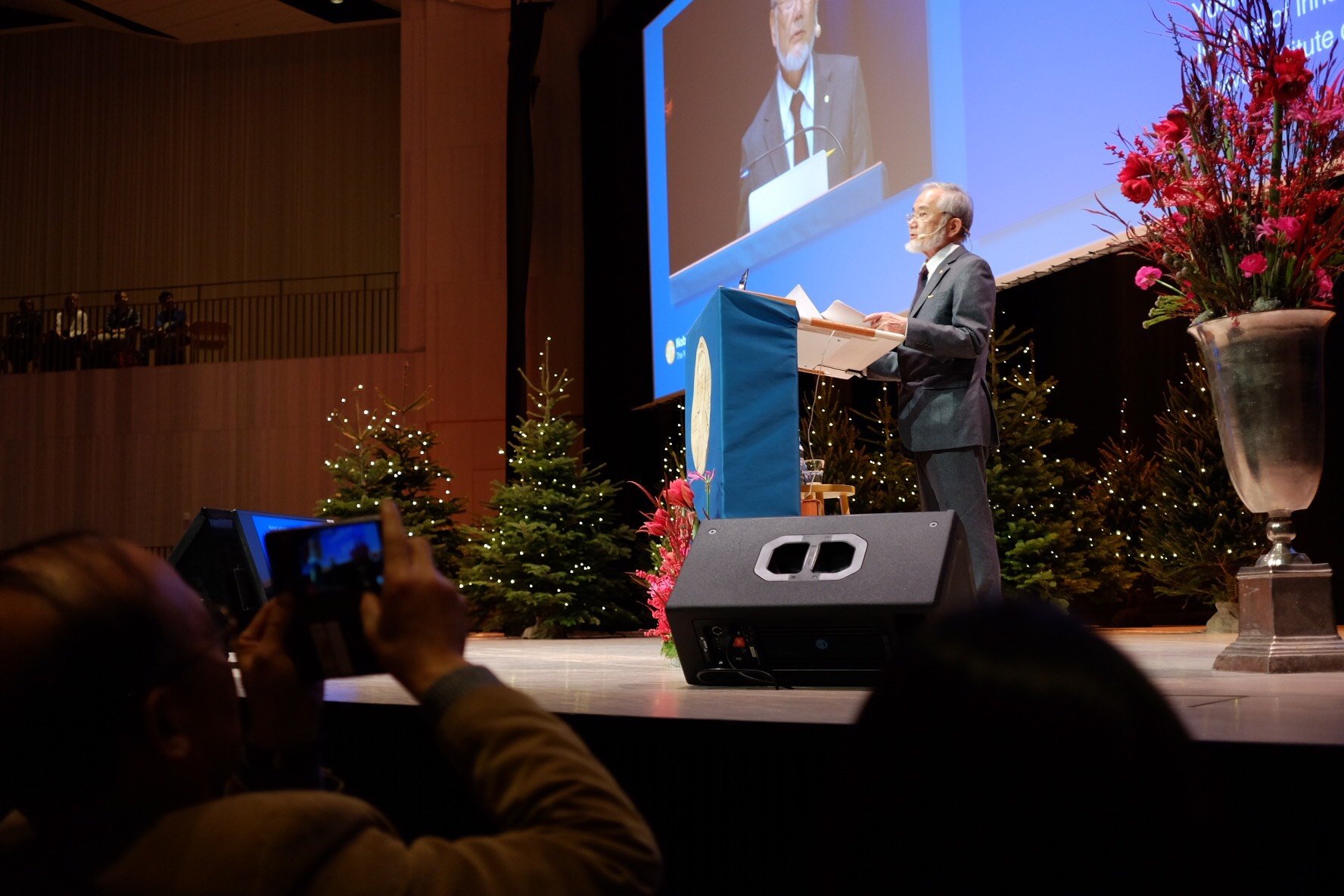 There was not an empty seat in Aula Medica when Yoshinori Ohsumi gave his Nobel lecture that was filled with treats for anyone interested in research. He spoke for an hour about the 27 years of research that culminated in him receiving the Nobel Prize in Physiology or Medicine.

It was under a cloudy December sky that the queue slowly wound its way into Aula Medica and filled every seat. When the star of the evening, Yoshinori Ohsumi, finally appeared, a thousand people watched him make his way to the stage, along with not a few wide-eyed cameras.

Before the lecture, Karin Dahlman-Wright, KI’s acting Vice-Chancellor, had welcomed the audience saying that today “We celebrate science”. And that’s precisely what this years winner of the Nobel Prize for Physiology or Medicine proceeded to do.

“I think every researcher is a product of his or her time,” he began in his customary quiet manner before continuing with a brief summary of his background.

I spent a great deal of time outside, collecting insects and observing the stars.

His journey through life began in Japan, where he was born just before the end of the Second World War. His early years were very difficult. His mother suffered from tuberculosis and was bed-ridden for long periods. He himself was undernourished as a result of the food shortage.

The seeds of his research, curiosity and an interest in nature, were sown already at that stage of his life.

“I spent a great deal of time outside, collecting insects and observing the stars, he told the audience.

After this glimpse into the Nobel Laureate’s private life, the lecture plunged into the world that Yoshinori Ohsumi was the first one to explore – autophagy’s molecular landscape. But first he explained, against a background of images of trees and rice fields in different seasons, why the degradation and recycling process is of interest.

“Nature is in a state of constant change and degradation is not destructive but a precondition for building something new. The proteins that are formed in our body do not come primarily from the food we eat but from other proteins in our body that have been degraded and recycled,” he said.

In 1988, when he had found his research focus, he was finally given the opportunity to set up a laboratory of his own.

“It was just me,” he said and raised a few laughs.

For me, these 27 years have been a winding path with many unexpected coincidences and encounters.

He spent a lot of time in his lab, “more than anyone else”, staring at yeast cells through a microscope. But in the vacuoles, the organelles where he believed degradation might take place, there didn’t seem to have anything at all going on. His breakthrough came when he managed to shut off a number of genes that are necessary for the process and thus get parts of the machinery to accumulate and become visible.

Then he could begin to put the puzzle together – 15 genes were identified, each with its own research history. Yoshinori Ohsumi and his team were gradually able to identify the various components in the process in the form of proteins and explain their functions.

He ended his lecture by showing a graph of the number of publications on the subject of autophagy. The field simmered along for a long time until it suddenly exploded, which is connected to the fact that the process proved to be important in a great many diseases and physiological processes.

“For me, these 27 years have been a winding path with many unexpected coincidences and encounters. I have always been driven by intellectual inquisitiveness and I never though autophagy would be of such great importance. I would like to thank all the researchers who have contributed to that,” he said and was given a standing ovation.