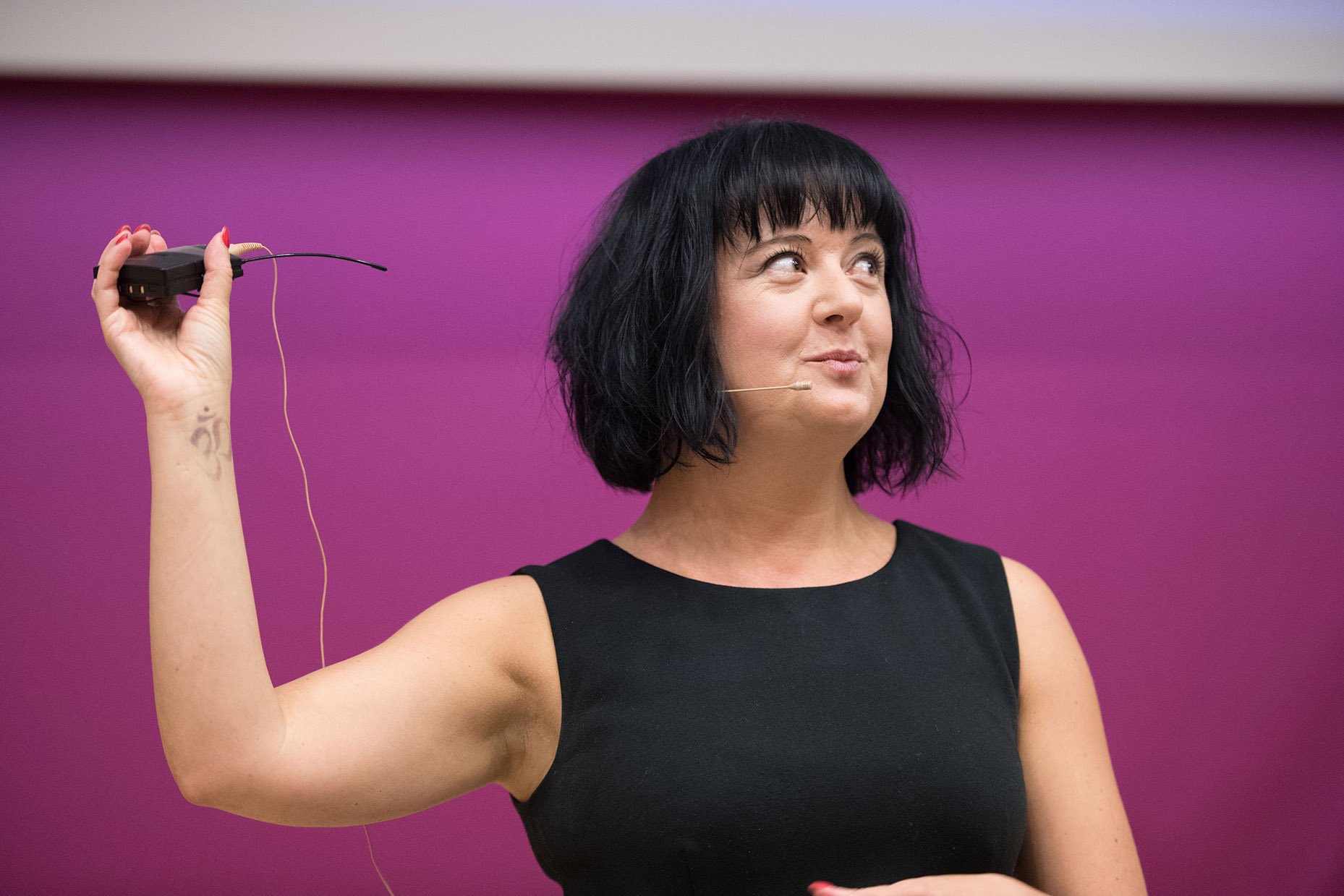 There are plenty of documents about diversity and equal treatment, but how are they actually used? What can we do to change such patterns in practice? Charlotte Signahl, a speaker on diversity, gave several examples when she spoke at Karolinska Institutet.

As Charlotte Signahl hooks up her wireless microphone, she explains that the packaging stated that you should insert the receiver in the inside pocket of your jacket. But how many people have seen a ladies’ jacket with an inside pocket?

The microphone’s headset is more suitable for a large ear size, and the colour of the microphone is light beige in colour, to blend in with a facial colour that not everyone has.

“It’s small details like this that tell us that ‘you’re not the kind we’re expected to listen to’,” says Charlotte Signahl.

It’s a Wednesday afternoon in January, and an interested group of researchers, students and staff is listening to a lecture on issues of diversity. Like most authorities, Karolinska Institutet has drawn up action plans, guidelines and codes of conduct to the effect that everyone should have the same opportunities regardless of factors such as gender, ethnic affinity, faith or functional impairment. But what does this mean?

Charlotte Signahl starts with the Swedish Act on the Prohibition of Discrimination, believing that a poor translation into Swedish of human rights has affected the whole way we discuss issues relating to rights in Sweden.

“The original text doesn’t talk about ‘... the equal value of all people’, but that we should treat all people ‘with the same dignity’. But this translation forms the basis of all our discussions about rights in Sweden.”

At the same time, she poses a rhetorical question about what happens when we treat all people equally. Is the outcome the same? After discussing matters on the benches, the conclusion is mostly that you have to understand that everyone has different circumstances, so it is not always right to treat everyone the same. You cannot know an individual’s circumstances in a given situation.

“That’s why it’s a big trap. When I start considering people’s possible circumstances that I go around and find, I can easily trip up,” says Charlotte Signahl.

Sylvie Garnbeck is the organiser and coordinator for equal opportunity in Karolinska Institutet’s central HR Department. She explains that the purpose of the lecture is to inspire, to provoke new thoughts and to educate, but also recognises that it is easiest for them to reach those who are already converted, those with an interest in and knowledge about these issues.

Malin Almgren, researcher at the Department of Clinical Neuroscience, in the audience, as was Anna-Lee Cöster Jansén, Main Health and Safety Delegate at KI, share her views. Maybe it’s not those who come to the lecture who should really be there. But Anna-Lee Cöster Jansén acknowledges the value in continuing to educate yourself:

“Every time you go to a lecture like this you hear new arguments that you can take with you and use to try and convince backward-looking people,” she says.

Employees: read more on Equal treatment
KI decides on a code of conduct for all co-workers, KI News: 18 March, 2015