Sex, Drug and Data’s Roll: looking at medications from a females and males perspective 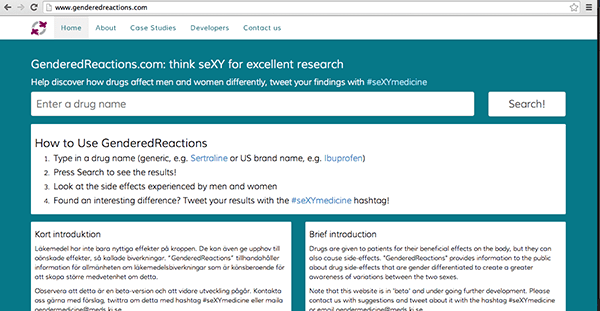 GenderedReactions.com is an interactive space that allows to quickly identify the side effects that drugs trick on people, split by their frequency between women and men.

The Center for Gender Medicine (CfGM) of Karolinska Institutet has released a beta website that highlights the male and female perspective in the use of pharmaceutical drugs.

GenderedReactions.com is an interactive space that allows to quickly identify the side effects that drugs trick on people, split by their frequency between women and men.

The website is the last of a long list of actions that the CfGM is putting in motion to emphasise the importance of sex in the medical practice, education and research.

Though “[F] or [M]” is the first cross everyone puts on a medical record, biomedical scientists have been proven particularly reluctant to acknowledge sex as a relevant variable in their research. “Publications often continue to neglect sex-based considerations and analyses in preclinical studies” said Francis Collins (director) an Janine Clayton (Women’s Research Program director) from the National Institute of Health, in a recent commentary to Nature. “The over-reliance on male animals and cells in preclinical research obscures key sex differences that could missguide clinical studies”.

Cell and animals have a sex, and humans are entitle of a gender identity too. It now becomes apparent that biomedical research that fails to account for these differences leaves a void in the basic understanding of biology.

Side effects of drugs may differ in females and males

With the purpose of promoting the right shift in mentality, the CfGM puts sex back to its right place. The new website shuffles public data to reveal how the side effects of drugs may differ in females and males, pointing to biological and psychological differences in the way a pharmaceutical acts in respect to the sex.

Where are the data coming from? In both US and EU, the regulatory agencies encourage patients and doctors to report any suspected side effect, whether from a prescribed or over-the-counter drug. This process is essential to support the post-marketing surveillance of all therapeutics. The US data end up into the FDA Adverse Event Reporting System (FAERS), a massive database that only recently was made open to public examination. But the browsing of FAERS is trivial, and require more than little knowledge on database queries.

Here comes the CfGM innovative thinking: GenderedReactions.com allows the users to search for the side effects of any drug dividing the resuts for the first - most relevant criteria that all medical doctors keep in mind: the sex of the patient. So we learn that aspirin causes twice as much flushing in males than females, which on the contrary experience more nausea.

The website was created in partnership with the Think Train, an international, "high-speed” problem solving group who aims to change the face of European healthcare. The Think Train is a team of young professionals who travels the old continent to provide “outside-the-box” resources to healthcare providers and educators.

GenderedReactions.com is a simple, innovative idea that makes people reflect on differences between women and men. The website is a new, significant resource to raise public awareness for the education of the future biomedical researchers, and the CfGM believes it will also be used by teachers and young investigators as precious source of information.