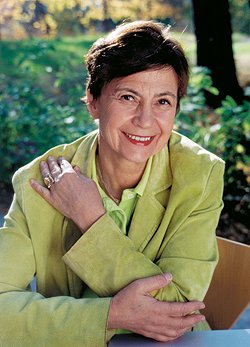 Congratulations on your Grand Silver Medal Award 2015 for outstanding medical research! Could you tell us about your research field and the research that led to the award?

Early on, we discovered viral etiologies of blood cell cancer in mice, and succeeded in immunizing the mice or their off-spring before the virus infections had resulted in tumors. It was also possible to cure these individuals even after tumor cells had developed.

Since then, I have designed a genetic HIV vaccine for immunotherapy and prophylaxis. We have targetted genes that HIV possesses and made small DNA constructs. The resulting vaccine has been used in human trials in four different countries in Europe and Africa. Presently it appears to be one of the most effective vaccines to prime for immune responses against a variety of HIV strains because it stimulates both humoral and cell-mediated immunity. It is an unusual vaccine concept, since the vaccine is composed of viral genes, not the usual proteins. This has several advantages: it will make the person himself produce the vaccine antigen, and the vaccine thus becomes tailor-made for the immune responses of the vaccinated individual. We are now attempting to design a similar tailor-made genetic vaccine against the common colo-rectal cancer cells.

Could you tell us a little about your research backgound?

I started medical school at Karolinska Institutet in 1966 and soon thereafter was accepted to do research with Professor George Klein´s group. My very first paper was together with Eva Klein, about treating leukemia induced by the Gross leukemia virus, both in infant and adult mice. These findings were published in Nature and Cancer Research.

I graduated from Professor Torbörn Caspersson´s Nobel Institute, after having studied the influence of viral genes on the development of tumors. Caspersson had the latest technology for measuring the changes in cell nuclei and chromosomes. We used both fluorescent and ordinary cell component microscopy combined with electron microscopy and spectroscopy. We could identify cells that were transformed by virus, as well as those that inhibited infection and transformation, and identified a transforming virus as an RNA murine leukemiavirus. Of particular interest was the definition of tolerance breakdown and early cell membrane damage produced by virus-specific antibodies to structures on the infected cell surface.

After my MD and PhD examinations, I worked clinically at the Department of Oncology at Radiumhemmet with prof Jerzy Einhorn, focusing on how tumors behave, and whether they carry neoantigens or other tumor related antigens. We treated testicular and bladder cancers. Testicular tumors consist of a mixture of undifferentiated and more differentiated embryonic-like cells, a composite of many different human tissues. We discovered that an otherwise typically female antigen, the placental alkaline phosphatase (PLAP) is a component of most seminomas in young males, which can be used for histopathological identification, diagnostic monitoring and might be a target for tumor immunotherapy.

Clinically, we contributed to make tumor antigen diagnostics available in Sweden, such as the secretion of CEA (carcinoembryonic antigen) from colo-rectal cancers, AFP (alphafetoprotein) to detect and monitor liver cancer and the PLAP and human chorionic gonadotropin (HCG) to detect and monitor testicular cancers. We pioneered immunolocalization of antigen-producing hidden tumors by injecting labelled antibodies which bound to previously unknown tumors. Such imaging techniques are now performed by magnetic resonance imaging where even small non-antigen producing tumors can be detected. This work started my interest in immunolocalization and immunization against tumor antigens or viruses that transform cells.

We analysed immunosuppressed individuals who often get complicated viral and tumor diseases, trying to discover the transforming viruses and resulting tumors. One example is the Kaposi sarcoma, now known to be initiated by herpes virus type 8, which occurs both in old otherwise healthy persons and in patients with HIV who are immunosuppressed. The Kaposi tumor development has nothing to do with HIV transformation, but is a result of the HIV-induced immunosuppression, allowing HHV8 transformed and genetically disturbed cells to proliferate. A relationship between immunosuppression and chromosomal alterations has been discovered for other herpes viruses and papilloma viruses.

When the HIV infection appeared, I studied means to abrogate the virus infection, and participated to elucidate the mechanisms of nucleotide- and nucleoside inhibitors of HIV and herpesvirus replication together with Professor Bo Öberg, at Astra and Uppsala University. In parallel, we picked antigens (peptides, proteins, genes) which could be used to develop a vaccine against HIV. We performed numerous animal experiments to define which peptides and which genes would give the best antibody or cellular immune responses. Later at KI this idea developed into extracting early regulatory genes of HIV replication. A combination of such regulatory genes became the world´s first HIV gene vaccine candidate, a clinical trial performed at Södersjukhuset in Stockholm, and published in Lancet.

The particular properties of gene vaccines are that they represent non-infectious and non-integrating DNA, not the whole virus. When the genes are delivered intracellularly in for instance the skin, they start out like a virus to produce RNA and protein within the vaccinated cells. The resulting proteins and peptides are presented at the cell surface, in harmony with the transplantation antigens of the vaccinated individual. You may say that the vaccine is actually produced within the body instead of at a vaccine company. This makes a much more targeted approach towards the patient´s own immune system, which is particularly important for very variable viruses such as HIV and influenza. We are thus selecting genes or gene components that can produce immune cellular responses suitable for the individual´s own transplantation genes (HLA alleles).

What are your plans for the future?

I will continue to implement the HIV DNA vaccine work together with the groups of Eric Sandström, Gunnel Biberfeld, Charlotta Nilsson and Pontus Blomberg at KI, Jorma Hinkula at LiU and the US Army and National Institutes of Health in Washington. There are plans to further improve the genetic HIV vaccine and to perform international efficacy trials. We have already performed clinical studies in Sweden, Italy, Tanzania and Mozambique. The first HIV vaccine study for children was performed in Italy with Professors Rossi and Palma and their groups in Italy and South Africa. In parallel, because of the similarities between tumors and immunosuppressive infectious diseases, we are working on vaccination for colo-rectal cancer. This vaccine has gone through clinical trials at Radiumhemmet, KI and the vaccine is now being remodified to make it more antigenic but also to modulate the immunosuppressive environment in which such tumors grow.

Does being at MTC affect your ability to achieve your goals as a researcher?

Yes, it does. The possibility to engage and collaborate with students during their PhD education is optimal. At MTC there is also a very active senior faculty adding immensely to our knowledge base. Some of the recent contributions, collaborations and ideas derive from Maria Isaguliants, Karl Ljungberg, Peter Liljeström, Gunilla Karlsson Hedestam, Klas Kärre and Francesca Chiodi.