Register giant in the field of dementia celebrates 10 years 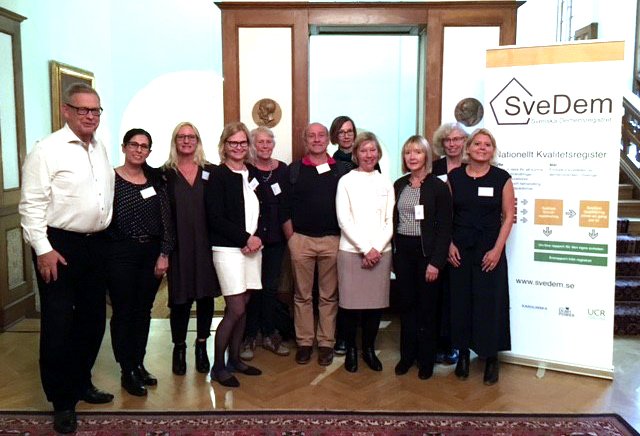 Today SveDem is the world's largest quality register for dementia diseases, and in May this year ten years had past since the registry was started. This was celebrated on Thursday, September 14, at the annual meeting in Svenska Läkaresällskapet's premises in Stockholm.

In SveDem, the quality is followed and annually evaluated in the investigation, care and treatment of people who have just received their dementia diagnosis.

"SveDem is a checklist for how the investigation and care will be performed, and one of the few registers that follow the patient throughout the care chain”, says Maria Eriksdotter, register holder at SveDem and the Head of the Department of Neurobiology, Care Sciences and Society (NVS), Karolinska Institutet.

Since the commencement of SveDem, all specialist memory clinics and nearly eight out of ten healthcare centers around the country have joined the registry, and data from more than 70,000 people with newly diagnosed dementia disease are included. Access to the information gathered is crucial for developing dementia care, and SveDem has had a major impact on health care.

"The proportion of people undergoing a dementia study that complies with the Swedish Social Board's guidelines has increased dramatically over the past decade, largely due to the fact that we can follow up and provide feedback throughout the care chain”, says Maria Eriksdotter.

"The interest in the register is also largely notable from an international perspective. Securing this type of registers is very important for strengthening and maintaining Sweden's position as a world leader in this field of research. It helps to improve care and leads to increased knowledge of the patient groups”, says Maria Eriksdotter.

Many scientific publications in collaboration between SveDem and NVS have also contributed to this new knowledge over the years, of which several of the publications are listed on SveDem's website.