Professor Bob Harris – with an award and a sword 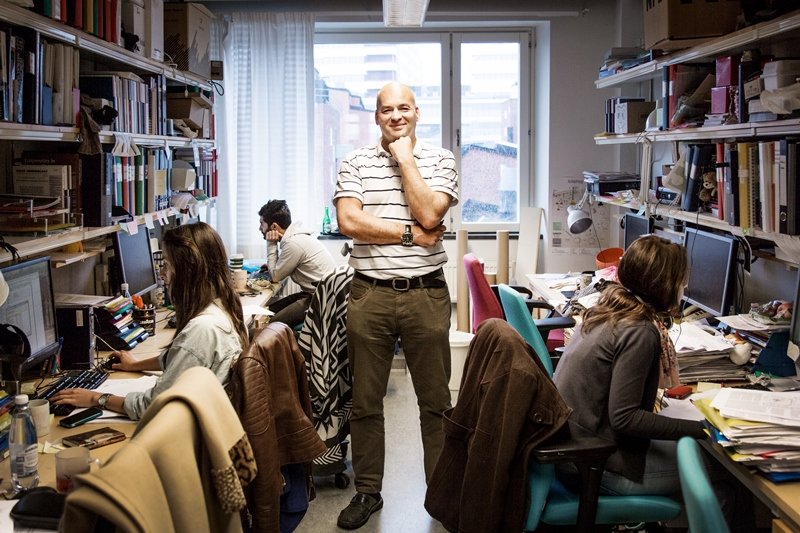 Getting the perfect hit on an opponent with a bamboo sword has much in common with medical research – at least if you ask Professor Bob Harris, who has been a competitor and instructor in the Japanese martial art of kendo for many years. One of this year’s two recipients of the KI pedagogy prize, he is the first to receive it for his contributions to doctoral education.

“When doing kendo, you have to study your opponent during combat and look for weaknesses. It’s the same with research. It’s all about probing your way ahead and constantly striving to do things better.”

His willingness to develop has also driven his passion for doctoral education. On being one of the two winners of this year’s pedagogy prize at KI along with teacher and researcher Lars Henningsohn at Clintec, he was acclaimed for having “been a driving force behind bringing an educational perspective into doctoral education.”

“I’m happiest for the sake of doctoral education, and that the prize shows that the educational side of things is important there,” he says.

His box of pedagogical tricks and activities contains webinars, lectures and seminars that students can stream from the net. He was also an early user of audience response systems, which enable his students to answer a question by pressing buttons and give immediate feedback on the compiled results. Robert Harris, or Bob as everyone calls him, is an advocate of interactivity in teaching and hopes to make that kind of technology more accessible, as he feels it is woefully underused at present. However, it is, he says, his commitment to changing views on doctoral education that won him the prize.

“I’m fairly headstrong and not afraid of conflict,” he says. “I see myself as innovative, in terms of both research and doctoral education, and have high expectations, as I want to see wholesale improvements.”

Bob Harris feels that there has been far too much emphasis on the results of the students’ research, and that the Swedish word for doctoral education, forskarutbildning (literally “researcher education”), is itself a problem.

“Is it research or is it education? Many people think that research is what you do in the lab and education is what you do when you go away on a course. We want to move away from the idea that they’re two separate things.”

When a doctoral student defends his or her thesis, it is up to the examination board to judge if he or she has attained the relevant intended learning outcomes. In recent years, the Board of Doctoral Education, on which Bob Harris sits, has been trying to raise awareness of these objectives amongst the students and their supervisors. By checking a student’s progress along the way, a supervisor, and the student, will both be able to judge if the objectives have been achieved and if a doctor’s hat is within reach.

“Now, seven years on, we can see that the intended learning outcomes are an increasingly common feature of a defence,” says Bob Harris. “Doctoral education is about the training as well, not just the results presented in the published articles.”

Doctoral education is a special kind of education, since it revolves so much around the collaboration of student and supervisor. The environments in which students work can be very different, and this depends in large part on their supervisors. And as for what makes a good supervisor, Bob Harris’s answer is simple:

“They have time, that’s the main thing. The time and interest to see someone grow. And in return you get back some solid research.”

He has attended many supervisor courses over the years, and admits that it can be something of a challenge for teachers who hold the same course year in year out to remain inspired when the same topics crop up again and again.

“The secret is to see every group as a fresh opportunity. Each group is different and you have to be flexible enough to be able to adapt to them. So even if the subject’s the same, the way you teach it is different every time, and that’s what makes it enjoyable.”

Back to kendo. Whether he’s teaching kendo or supervising doctoral students, there’s one thing that matters to Bob Harris, and that’s that each individual develops according to his or her abilities.

“If all I can do is teach the stuff I know myself, I’d be a pretty rubbish teacher. I want them to be better researchers and better supervisors than I am. I’m happy to get whacked by my kendo students. I’m a tough trainer and a tough director of studies, because I expect a great deal from my students. But I’m a nice person too.”