Preparing for the management transition 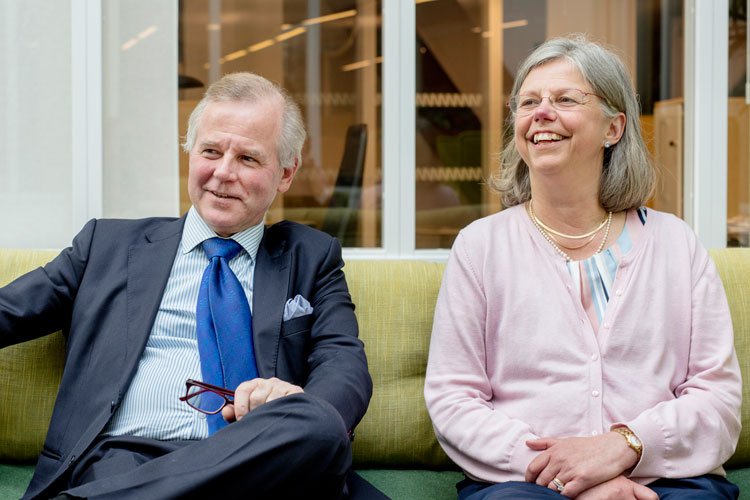 Karolinska Institutet’s vice-chancellor-elect, Ole Petter Ottersen, has held his first day of meetings with representatives of the organisation, including Acting Vice-Chancellor Karin Dahlman-Wright, the chair of the university board Mikael Odenberg, the deans and University Director Per Bengtsson. He also attended a scientific meeting in the Nobel Forum.

Ole Petter Ottersen takes over as vice-chancellor on 1 August 2017, at which point Karin Dahlman-Wright resumes her ordinary role as pro-vice-chancellor. Amongst the issues they discussed during his visit, which took place on 19 May, were the responsibilities that fall to them and how they are to be shared.

“I’m looking forward to being a pro-vice-chancellor again, which is the job I actually applied for,” says Karin Dahlman-Wright, who admits that it came as a surprise to everyone, not least to her, for her to end up after a couple of days in the middle of all the turmoil that led to her stepping in as acting vice-chancellor.

After the then vice-chancellor resigned his office following the storm of criticism over the Macchiarini case, Karolinska Institutet has been engaged not only in investigations and remedial action plans but also in a recruitment process to find a new vice chancellor.

In April, the government appointed Ole Petter Ottersen as vice-chancellor at Karolinska Institutet, the only final candidate that the University Board had put forward.

Ole Petter Ottersen will be quitting the rectorate of Oslo University this summer, but stresses that he will not have any formal role at KI before 1 August 2017.

“But I’m hoping for many discussions before that,” he says. “I’ve got a very sharp learning curve to follow, given all I need to know about – Swedish law, the academic sector and, not least, the culture. It’s incredibly inspiring.”

“It’s also imperative for me that Karin knows the university so well and is continuing as pro-vice-chancellor. I’m looking forward very much to working with her.”

As the newly appointed pro-vice-chancellor the idea for Karin Dahlman-Wright was to be in charge of infrastructure, but this year Stefan Eriksson was made the new vice-dean of infrastructure, so it is time for a revised job description. Whether her remit will be healthcare issues, which have often landed on the pro-vice-chancellor’s desk in the past, is a matter for further discussion.

“The main thing for me is to engage in new issues with the new vice-chancellor, it’s really important to move on,” says Karin Dahlman-Wright, adding:

“And I can’t wait to learn some Norwegian!”

Ole Petter Ottersen has his own plans for that:

“I’ll try to steer clear of the very hardest words, like utdanning and overflate and say utbildning (education) and yta (space) instead,” he says.