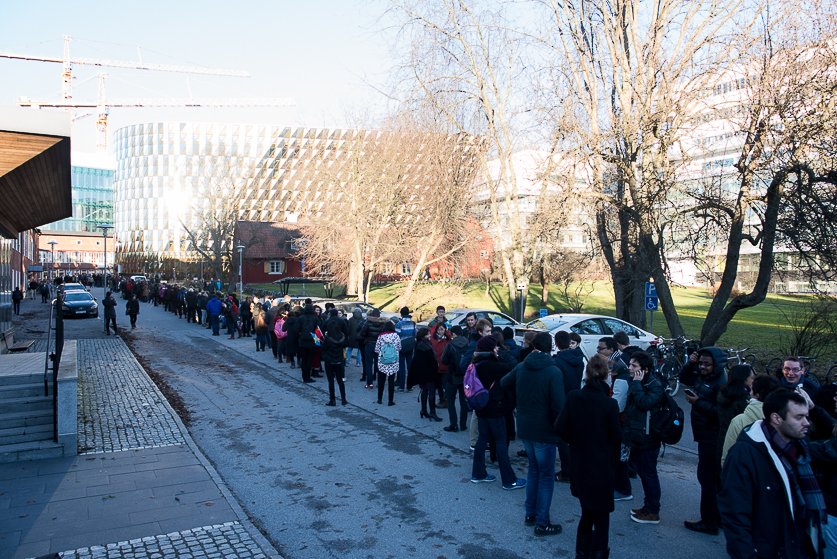 This year’s Nobel laureates in physiology or medicine received a very warm welcome from the audience at the Nobel Lecture at Karolinska Institutet on 7 December. Their discoveries have saved millions of lives from fatal and crippling parasite diseases.

There were many people who wanted to come to KI to listen to the 2015 Nobel laureates in physiology or medicine Satoshi Ōmura, William Campbell and Youyou Tu, and those seeking a place at the head of the queue waited for hours outside Aula Medica in glorious December sunshine.

Following Vice-Chancellor Anders Hamsten’s welcome address, the packed auditorium was given a presentation of this year’s prize winners by Nobel Committee member Professor Jan Andersson. According to Prof. Andersson, while Nobel prizes have been awarded over the years for important discoveries on infection diseases, this year’s is the first to reward the treatment of parasite diseases. Satoshi Ōmura and William Campbell receive their prize for their discovery of avermectin (later modified to ivermectin), which is used against parasitic worms, and Youyou Tu for her discovery of the anti-malaria drug artemisinin.

The first laureate to speak was Professor Satoshi Ōmura, who talked about his work cultivating and identifying previously unknown microbe strains in the hunt for species with interesting bioactive properties. The discoveries he made at the Kitasato Institute have given rise to a large number of new drugs, the most important of which is without doubt avermectin/ivermectin, developed by Merck from bacteria supplied by Ōmura.

Despite decades of searching the globe, Satoshi Ōmura explained that the microbe has never been discovered again, and that their sample is the only source for all industrial production of avermectin.

Although avermectin/ivermectin treatments have saved many millions of people from river blindness and elephantitis, Ōmura – born 1935 – does not want to call it a day.

“I shall continue to search for more and more [substances] that can bring health and socioeconomic benefits to communities around the world and encourage new generations of scientists to do the same.”

A bizarre but simple principle

After Ōmura’s lecture, Professor William Campbell took to the podium – which seemed a rather fitting reflection of their collaboration, in which Ōmura sent a large number of microbe strains to Campbell at Merck in the USA for evaluation.

Given what we are taught about science, with its well-regulated system and emphasis on measurement, one might find Merck’s methods a little dubious, suggested Campbell. “The underlying principle was simple,” he explained. “It was bizarre, but it was simple. And I have described it this way: you line up a series of infected mice. You treat each mouse with an unknown amount of an unknown substance that might not be there. And then you check to see if it worked.”

This too, he hastened to add, is well-regulated science. In May 1975, the method gave results: a mouse became completely healthy, which led to the discovery of avermectin.

Eventually Campbell travelled to Japan to meet his colleague Satoshi Ōmura, and inadvertently showing the audience a private photo from 1990 of the then 55-year old Ōmura as proof, he joked, “You can see that he has not changed at all!”

Campbell lectured with humour as well as gravity, recounting that ivermectin was initially developed for veterinarian use, but that Merck soon realised that it could also be used on humans. Trials showed that avermectin could prevent both river blindness and elephantitis, and since the diseases mainly exist in poor countries that would not be able to afford the drug, Merck decided to donate it.

Part of a confidential military project

The final speaker was Professor Youyou Tu, whose speech was translated from Mandarin to English and projected onto the large screen behind her. She described the discovery of artemisinin in China in the early 1970s – an exciting story that long remained unheard of in the west. Tu was part of the secret military project 523, where she was entrusted with developing antimalarial drugs from Chinese medicine using modern techniques.

“No doubt, traditional Chinese medicine provides a rich resource,” said Tu, who is trained in both traditional and modern medicine. “Nevertheless it requires our thoughtful consideration to explore and improve.”

After lengthy and thorough detective work, Tu had collected 2,000 traditional prescriptions and recipes, many of which were then assayed using modern methods. Her breakthrough came in October 1971, when research using wormwood (qinghao) extract proved highly effective on mice. It was then less than a year before trials were done on humans, but in order to proceed quickly without compromising patient safety, the research team began by testing the extract on themselves. Their successes led to the discovery of the substance artemisinin, which has saved many millions of people from malaria, halving the number of fatalities since 2000.

However, Youyou Tu warned about the growing resistance to the substance, and strongly urged medical compliance with the recommendations laid out in the Global Plan for Artemisinin Resistance Containment.

Tu made reference in her speech to icons of Western culture and science, such as Shakespeare and Pasteur, and closed with a poem by Wang Zhihuan (688–742 CE) “On the Stork Tower”:

The sun along the mountain bows,
The Yellow River seawards flows.
You will enjoy a grander sight,
By climbing to a greater height.

Listen to the Nobel lectures

Satoshi Ōmura - Nobel Lecture: A splendid gift from the Earth: The origins & impact of Avermectin:

YouYou Tu: Discovery of Artemisinin - A gift from Traditional Chinese Medicine to the World:

The fight against parasitic diseases continues