Meet one of this year's academic awardees – Rune Brautaset 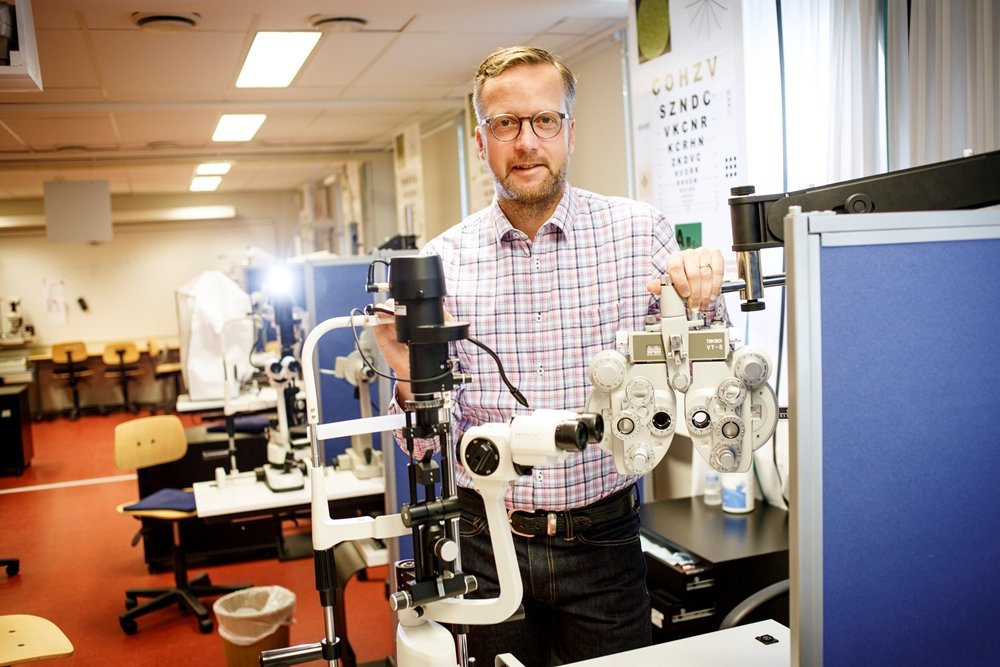 This Thursday, October 15, the 2015 academic awardees received their prizes at the installation ceremony at Karolinska Institutet. Dr Rune Brautaset, head of KI’s optometry programme, was awarded this year’s Pedagogical Prize.

A banana box full of old glasses and a converted quiet room. These are two of the reasons why Dr Rune Brautaset, head of KI’s optometry programme, was awarded this year’s Pedagogical Prize. But there are more reasons, one of the most important being the training laboratory at St Erik’s Eye Hospital, where eleven fully equipped optometry stations have been installed. Here, students can examine each other’s eyes – and they do. In a lunch room we meet optometry student Mirza Karamovic, who feels ready to take on his forthcoming customers and patients.

“The training lab is open until ten at night, and even at weekends,” he says. “We go there of our own accord to practise different kinds of eye test. I feel comfortable with it now.”

I’ve tried to explain to people in the industry that if they want skilled opticians, they’ll have to help pay for them.

The room was expensive to fit out, but contributions have come from different quarters of the optometry business.

“I’ve tried to explain to people in the industry that if they want skilled opticians, they’ll have to help pay for them,” says Dr Brautaset.

Dr Brautaset studied optometry in his native Norway and in England, two countries that were quick to modernise their training programmes to match developments in the industry, which have taken it from a profession for craftspeople focused on grinding and mounting lenses to one of registered healthcare providers working with vision and ocular health.

In 2000, Dr Brautaset moved to Sweden, where he started working as a junior lecturer on KI’s optometry programme.

“Our lecture halls were full of grinding machines,” he says. “I wanted to make space for what I’d learnt in Norway and England.”

While working at KI, Dr Brautaset was studying for his doctorate in England, and in 2003 he became the first optician in Sweden to hold a PhD. Two years later he was made director of KI’s study programme in optometry and began to develop the optometry unit, which also offers a one-year Master’s degree for opticians and the opportunity to conduct research.

Nowadays we discuss what characterises a scientific approach from the very first term.

In 2012, the then National Agency for Higher Education (now the Swedish Higher Education Authority) criticised the programme for the inferior quality of its students’ degree projects. The Master’s programme was, however, found to be satisfactory.

“It was true, but we’d already started making improvements by then,” he says. “Nowadays we discuss what characterises a scientific approach from the very first term, and give the students more training in writing papers.”

Today, half of the teachers hold PhDs, and here too, the business sector has done its bit.

“Without it, we’d never get started,” he says, “Thanks to the funding we’ve got from the industry, we were able to set aside time for research so that we could turn out our first doctoral graduates. Now we have research results and ongoing projects, and can apply for regular funding.”

Dr Brautaset received the Pedagogical Prize on 15 October in Aula Medica. The judges citation praises his clinical and scientific achievements and is punctuated with terms like sustainable development and diversity – which is where the banana boxes and quiet room come in. The boxes contain old glasses, the lens strengths of which are measured and noted down by the students as they learn to operate the measuring equipment. They are then donated to aid projects in which needy people in other countries get help choosing the most suitable pair for themselves. As for the quiet room, it has been turned into a oft-frequented prayer room.

“We’ve got many students with a foreign background,” explains Dr Brautaset, “which I think is because we’re rumoured to be good at making people feel welcome.”

This article was published in KI Bladet 3/2015.