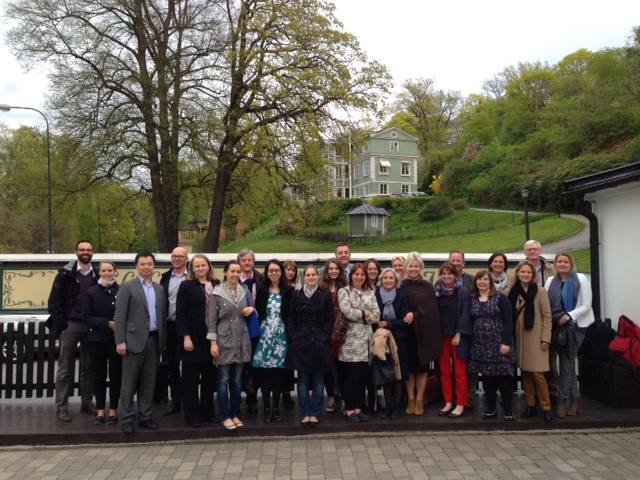 The Centre for Gender Medicine welcomes experts from IMPROvED, the first European project which aims to predict pregnancy complications before they manifest. Here is what those experts discussed at the meeting.

Last year, half a million babies died as a direct consequence of pre-eclampsia, a major complication of pregnancy where baby and mother’s life are at risk. Pre-eclampsia forms when the placenta does not get enough blood from the mother’s body to sustain the baby development, leading to a rise in women’s blood pressure and - in severe cases - organ dysfunction, stroke and eclampsia (the involuntary contraction of muscles) may threatened both mother and fetus life.

Today we don’t know what causes pre-eclampsia, and the only way to cure it is the delivery of the baby, even when the fetus may have few chance to survive outside the mother’s belly.

To better understand this leading cause of perinatal death in Europe, an international team of experts met in May at Karolinska Institutet, hosted by the Centre for Gender Medicine. The head of the Centre, Karolina Kublickiene also acts as a principal investigator at the IMPROvED Swedish site.

At the table sat representatives of the IMPROvED consortium (IMproved PRegnancy Outcomes by Early Detection), a European network of obstetric clinicians, midwives, scientists and corporations with the mandate to predict pregnancy complication at start. The meeting was coordinated by Professor Louise Kenny, consultant obstetrician and Director of the Infant Research Centre at Cork University (Ireland), and director of IMPROvED.

‘Pre-eclampsia accounts globally for the death of 70.000 women every year’ says Dr Kenny, ‘and since the condition develops without obvious symptoms, when clinicians realise there is a problem they have a very narrow window of time to plan intervention’.

To help patients and clinicians to monitor a condition that develop silently, IMPROvED will develop a new blood test that would confidently predict the risk of a woman to develop pre-eclampsia. To achieve its goal, IMPROvED is recruiting first-time pregnant women from six different centres (in Ireland, Germany, United Kingdom, The Netherland and Sweden) to monitor their health and collect blood, saliva, hair and urine samples. With the help of the state-of-the-art mass spectrometry, researchers hope to find the “signature” of pre-eclampsia before its appearance.

What’s on the table?

The team of twentyfive experts worked closely for two days to discuss the details of the clinical trial, the first to ever test two new prototypes for early pregnancy screening.

‘The Stockholm IMPROvED meeting allowed the consortium to reinforce its bonds’ says Dr Robin Tuytten, from the R&D department of Metabolomic Diagnostics, a medical diagnostics company based in Cork, Ireland. ‘Importantly, it gave us the opportunity to engage with the European Commission, as the Project Officer joined our discussion. Being able to share our progress and aspirations with the EC was very rewarding’. Of similar opinion is Diarmuid Cahalane, Head of Regulatory Affairs at Metabolomic Diagnostics: ‘The meeting was very informative: by engaging with clinicians, we were able to gain a powerful perspective on how best to equip them with the tools to help their patients’.

Because the project ask mothers to meet with their midwife with a certain frequency, it heavily depends on the creation of a strong bound between researcher midwifes and the volunteers. ‘Women who agree to participate are not only helping make pregnancy safer, but also gain quality time spent with specialised nurses’ says Dr Boel Niklasson, midwife project coordinator, who attended the meeting.

Of similar opinion is Yvonne Clune - project manager of IMPROvED - who updated the team on the latest trends of the recruitment rate: ‘We recently reached the milestone of 1.700 mothers, getting closer to the final goal of 5.000. What is promising is that 800 patients enrolled just in the past six months”. Such high number would have never been possible without recruitment collaborators present in every Centre in Europe. “In Stockholm, we are really proud to work with the clinic Ultajudsbarmorskor, with the Midwife's Team at the Centre for Fetal Medicine at Karolinska Hospital, and many more” says Dr Karolina Kublickiene, CEO of CfGM. ‘Their help is fundamental’.

Innovation is on the way

The diagnostic team in Ireland presented the progress of their recent study to predict pre-eclampsia. ‘Metabolomic Diagnostics was able to share with the consortium the results of a first study wherein we used a prototype of our test to predict preeclampsia early in pregnancy’ says Dr Tuytten. ‘To everybody’s delight, the results were very promising and we were able to achieve a good prediction rate!’.

But to convince doctors and patients of the power of the pre-eclampsia test, a further clinical trial will require the whole 5.000 women to be enrolled, with a thoughtful analysis of all their samples. Dr Tuytten continues: ‘By analysing the 15 weeks blood samples taken from the 5.000 volunteers, we aim at validating that our test can indeed accurately predict pre-eclampsia. This will be done by comparing the risk prediction as obtained with the blood test at 15 weeks, with the actual pregnancy outcome as recorded by IMPROvED’.

To help the consortium to organise the millions of data generated by IMPROvED, and to correctly protect women's privacy, the Swedish company MedSciNet AB is developing a software to handle and organise all the data of the study. ‘As Application Service Provider, we will make the software available to all the researcher partners in Europe via a browser application’ says Sten Marthinsson, Sales Manager of MedSciNet. ‘All researchers involved will have access to the data according to their defined access rights, helping to promote data sharing in perfect awareness of people’s privacy’.

Because severe pre-eclampsia is a dangerous condition that strike without warning, today doctors rely on few hours to decide whether to deliver an infants who may not survive. ‘We are working to change the odds’ says Dr Kublickiene ‘and are still looking for mothers who want to help science’.

The meeting last week was very informative from the perspective of engaging with the clinicians and demonstrating our shared objectives of delivering a finished product to the market in a timely, compliant manner.

In order to successfully deploy our test on the market we will need to meet three criteria:

The clinicians in the room with us last week included key opinion leaders. By demonstrating the outcome of our research to date, we were able to demonstrate a modicum of clinical validity. However, the only people who can demonstrate clinical utility are clinicians. We can deliver the intelligence which proves that the test works: we need the support of clinicians to translate this into actionable intelligence which can change case management and thus deliver a clinical benefit to the patients.

By engaging with the clinicians we were able to gain a powerful perspective on how best to equip them with the correct tools to help them treat their patients effectively.

By engaging with patient advocacy groups, we are aware of and familiar with the people who own the need for a solution. By engaging with the clinicians and researchers last week in Stockholm we came one step closer to delivering a solution to these patients.

Did you find the meeting productive?

Yes. The Stockholm IMPROvED meeting allowed the IMPROvED consortium to reinforce the bonds between all partners involved. With IMPROvED a collaboration between several academic teams and a number of commercial entities, the yearly IMPROvED meeting is important to mutually understand and appreciate the efforts undertaken by all consortium members.

The possibility to directly engage with many clinicians, midwifes and clinical laboratory staff dedicated to pregnancy care at the same time is unique and very instructive to us, the commercial partners in IMPROvED. In addition, the Stockholm meeting gave us all the opportunity to engage directly with the European Commission: the IMPROvED EC project officer joined our discussion for a day. Being able to share our progress and aspirations with the European Commission was very rewarding.

Did you take any important decision?

At the meeting the ambition to bring IMPROvED to success was re-iterated by all consortium members.

As part of the Metabolomic Diagn Team, what did you presented at the meeting and is there any interesting news that we can safety share with the public?

At the IMPROvED meeting in Stockholm, Metabolomic Diagnostics had the opportunity to update the consortium members on the progress made in its development of its preeclampsia risk stratification product. I was able to share with the consortium the results of a first study wherein we used a prototype of our test to predict preeclampsia early in pregnancy. To everybody’s delight the results were very promising: good prediction was achieved! Following this first great result, the Metabolomic Diagnostics’ team is even more energized to further develop its technology and to proof the merits of a first-in-its-kind preeclampsia prediction test in IMPROvED.

The mission of your company in IMPROvED

Metabolomic Diagnostics is developing a novel clinical test to identify which 1st time pregnant are at risk of developing preeclampsia later in their pregnancy. Our test is looking at metabolite biomarkers in the blood of pregnant women when they are about 15 weeks pregnant. To determine the levels of several fore-telling metabolites simultaneously we use a special analytical technique called mass spectrometry. Using a mass spectrometer we are able to identify (essentially by “weighing” the mass of the metabolites) and quantify the metabolites of interest in blood. When combining the information on the levels of different metabolites in a mathematical algorithm, we can determine whether a pregnant woman has a low or high risk of developing preeclampsia later in her pregnancy. This information is provided to the health care provider taking care of the pregnant woman, who then can personalize the pregnancy care of the woman according to her needs. By analysing the 15 weeks blood samples taken from the 5000 pregnant women participating in IMPROvED, we aim at confirming (validating) that our test can indeed accurately predict preeclampsia. This will be done by comparing the risk prediction as obtained with the Metabolomic Diagnostics’ test, using a 15 weeks blood sample, with the actual pregnancy outcome as recorded by the IMPROvED midwifes and obstetricians.