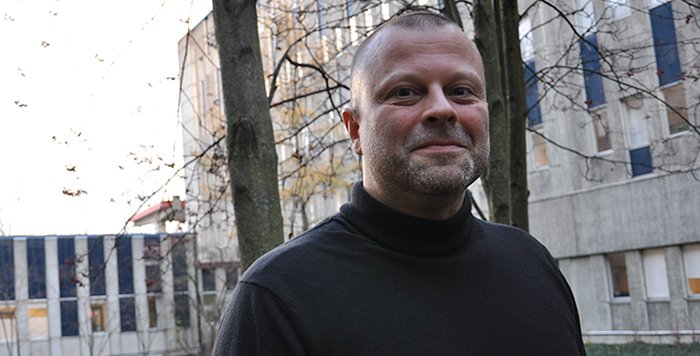 Jonas Klingström was recently appointed as associate professor of virology at MedH. He conducts research on Hantaviruses and has a lot going on right now.

- It feels great to have been appointed associate professor - it´s an acknowledgement that you do things right - but I have not had time to think too much about it yet, says Jonas.

He has his lab at the Public Health Agency (formerly SMI) in Solna, but at the end of the year, he plans to move parts of his lab research to Huddinge to get closer to his colleagues at CIM.

He is also working on recruiting more people to his team, which currently consists of Jonas himself and two PhD students.

- I hope to be able to employ a couple of postdocs with different specialties, such as in inflammation, he says.

The virus which the group is studying, Hantavirus, causes namely a very strong inflammatory response in people who are infected. It is a so-called hemorrhagic fever [JK1] virus where rodents act as natural hosts. They spread the disease, but do not become ill themselves.

- But in humans Hantaviruses can cause two different diseases, hemorrhagic fever with renal syndrome (HFRS) and Hantavirus pulmonary syndrome cardio (HCPS). This includes Nephropathia Epidemica, a milder form of HFRS with low mortality, which exists in Europe, including northern Sweden. HFRS is also common in Asia. HCPS is found in North and South America and has a mortality rate of about 40 percent.

Through his research Jonas Klingström is trying to find out exactly how hantaviruses causes illness in humans. He recently received a three-year grant from the Swedish Research Council to investigate the mechanisms behind this. At the same time, he works closely with Hans-Gustaf Ljunggren in a major project, with support from the Foundation for Strategic Research, which focuses on finding treatment for severe Hantavirus infections.

- A new and unexpected discovery we made is that we have seen that people who have been diagnosed with Nephropathia Epidemica have 70 percent higher risk to develop lymphoma cancer. That connection is also something I will look at, Jonas says.

Why did you choose to do research about Hantavirus?

- When I studied molecular biology at Stockholm University the field of virology was lacking, which I was very interested in. The fact that my choice later was just Hantavirus was mostly a coincidence. My PhD project at KI was about this and I was fascinated by how these viruses cause severe disease and that there was no knowledge of the mechanisms behind this; after that, I simply continued to study hantaviruses and the diseases they cause.

Jonas Klingström describes himself as "extremely curious", a quality which is useful in his research.

- I think it's fun and exciting to try to understand how this virus works. My driving force is to generate new knowledge that leads to finding a good treatment, which may also act on other hemorrhagic fever viruses such as Ebola virus, says Jonas.