How we innovated the Stanford’s MOOC “International Women Health and Human Rights” and used it as a platform to teach Gender, Health and Rights in Sweden 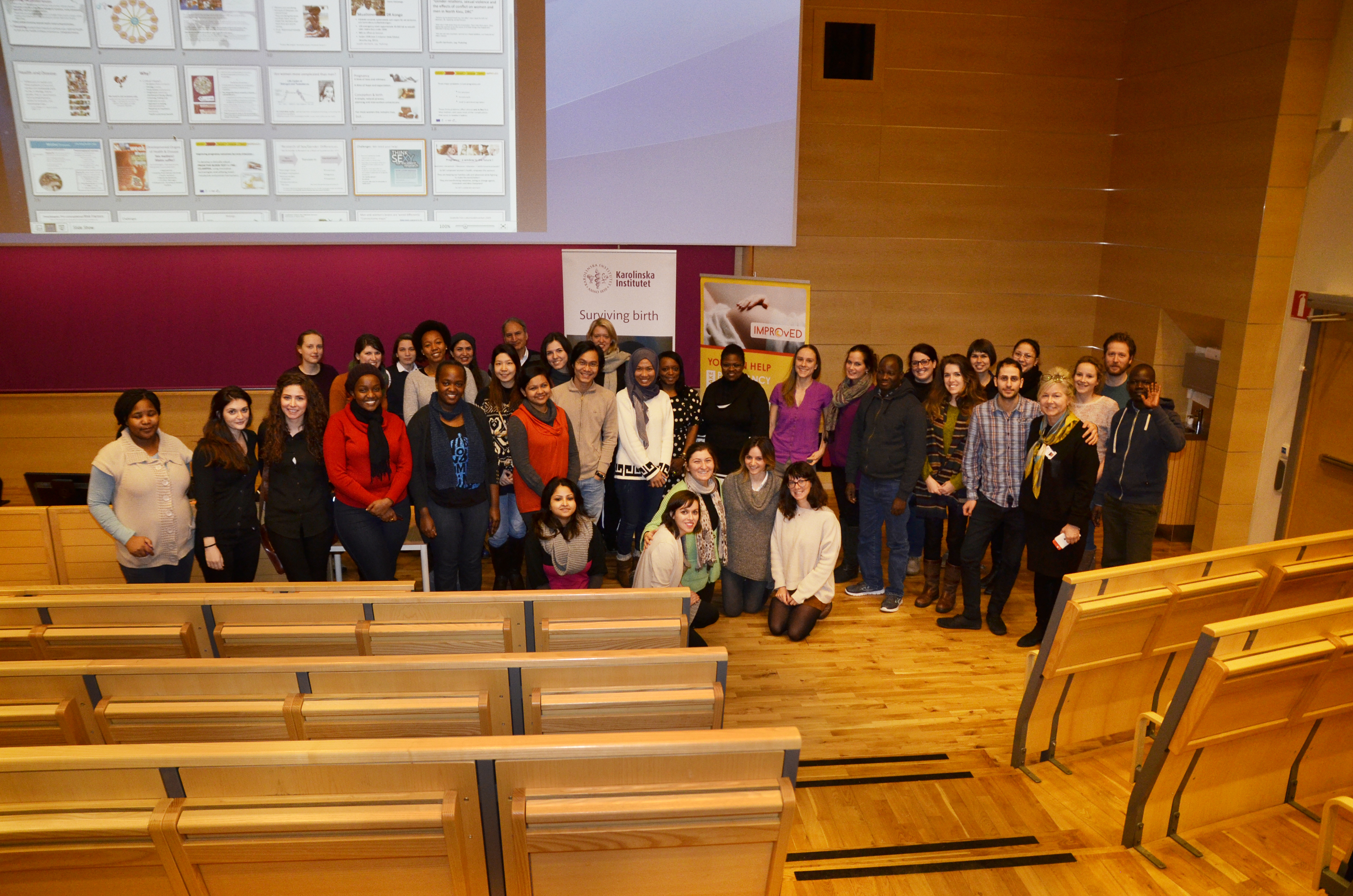 If we think of a course that impacted our life, a class that truly changed our view of health connected with Human Rights has been the Anne Firth Murray’s MOOC International Women’s Health and Human Rights. Now we took the course to run a seminar series for doctoral, medical and undergraduate students at Karolinska Institutet.

by Karin Båge and Giulia Gaudenz

The massive open online course (MOOC) are models for delivering learning content online to any person who wants to take a course, with no limit on attendance. The opportunity that these courses offer are to learn new things in a topic that you are interested in, while also connecting to a network of others around the world who are also passionate about the same things. At Karolinska Institutet we wanted to take the “International Women’s Health and Human Rights” MOOC one step further and make the best use of the course while integrating it in a modern class room.

Having realized that Karolinska was lacking an interdisciplinary course in International Women’s Health, we decided to fill the gap by introducing the seminar series “Gender, Health and Rights”, based on a “classroom version” of Anne’s MOOC. Combining our expertise, Karin’s in Anthropology and International Relations and Giulia’s in Neuroscience and Global Health, we brainstormed and prototyped a way to take the MOOC material to a traditional open classroom setting. Our call for help and support was promptly answered by the KI Centre for Global Health and KI Centre for Gender Medicine, both of which supported the course from the beginning.

We wanted to create an evening study group dedicated to students who could follow the MOOC together and discuss the topics more in-depth on a regular basis, but also invite local guest speakers from KI and other organizations in Stockholm to further our understanding of the Swedish experience of certain issues raised in the MOOC. We were going to consider the seminar series a success if 15 people signed up. A week prior to the start of the seminar series, we promoted it using social media, official mailing lists and by word of mouth. In the first three days of the registration, over 80 people signed up, and in total we had over 100 people registered!

A global class of attendees

The driving energy of our seminar series was the diversity that the students brought to the classroom. We were a very varied group, most of which were undergraduate, medical or doctoral students from the local universities around Stockholm. Even some people from the Swedish Health Care Sector who worked with “patient safety” attended the course. While the majority of the students were women, the group represented a wide variety of professional as well as geographical backgrounds. We had a few students studying to become doctors, nutritionists, but also those doing a Master’s in Global Health or International Education or Political Science. The world was represented across all continents including Brazil, Hong Kong, Cambodia, Italy, Germany, Turkey, Kenya, Mali, Spain, Ghana, Japan, Sweden, Portugal, Malaysia, India, among many others.

The format has been quite dynamic, we met once a week and made sure to serve up some coffee, tea, cookies and sandwiches for the hungry brains. Ahead of class, we would send out weekly emails with links to recommended reading of the actual MOOCs and information about the speaker for the week. We also had a facebook group where we posted articles and events relevant to the issues raised in the MOOC and seminar series. Several of our participants were students affiliated with Makarere University in Uganda, and participated in a sort of “double MOOC”. The weekly emails were very helpful for those students as well as the facebook group where they would post comments on the readings or videos.

The MOOC International Women’s Health and Human Rights brings up many critical issues (often meaning life or death) for girls and women, beginning in infancy and childhood, then moving through adolescence, reproductive years and aging. Some of the “topics discussed include son preference, education, HIV/AIDS, reproductive health, violence in the home and in war and refugee circumstances, women's work, sex trafficking, and aging” (see course description).

What were some of the most popular seminars?

“Although our seminar series followed each week of the MOOC, we unfortunately did not have enough time to cover all topics raised”, says Giulia. “However, some of the more appreciated lectures included Women in War and Refugee Situations, HIV/AIDS and Violence Against Women. For the first, we had a panel discussion with 3 speakers who talked about the refugee situation in Sweden as well as in the Democratic Republic of Congo (DRC). One of the panelists represented a research project at Uppsala University that studies the importance of integrating a health perspective to immigration and integration. The other came from the organization “Doctors of the World” - an organisation that runs a clinic for undocumented migrants and poor immigrants from other EU nations, most of whom are homeless. The third was a psychologist who works with women who have suffered sexual torture in the DRC and shared her experience of how to work to heal such trauma.”

“In addition,” Karin says, “for the session focusing on the topic of Violence Against Women we invited the Chair of the Swedish organization “Men for Gender Equality” who spoke about the organization’s work with young men and changing attitudes about harmful norms. And after his talk, we screened the film “Gulabi Gang” - a documentary film that tells the story of how a community of women come together to confront the epidemic of domestic violence in their villages. This was a very powerful session as both the film and the organization inspired a lot of discussions on values and norms regarding violent behavior.”

“Finally a talk about how women are more biologically vulnerable to the HIV virus was also very much appreciated as it furthered the students perspective of why women are so vulnerable to the virus, in addition to the social contexts which often intensifies this vulnerability”, adds Giulia.

Each session included group discussions, often times using the “discussion questions” offered by the MOOC. One of the questions that the group was most interested in discussing was the one on norms around male stereotypes helping out with child rearing were changing in people’s home countries. These discussions were facilitated by us both and we would document the discussion by taking notes on a whiteboard in the classroom.

“To end the successful seminar series we had a skype call with Professor Anne Firth Murray where students could ask her questions directly to her”, says Giulia. “This was a definite highlight of our project because it really brought us closer to her and it was an inspiring way to end the series”, says Karin. At this session students were awarded with a diploma if they had attended more than 60% of the seminar series. Doctoral students could apply through their study directors to get credit for the seminar series.

Most of the students were very excited and interested in the topics, the local speakers as well as interacting with others regarding these critical issues. The one critique that they gave us that there wasn’t enough time! One person said in their course evaluation that what they liked the best about the seminar series was “the discussions and the openess of the participants. All opinios were welcome and nothing was really frowned upon. We were all the to learn more from you and each other.” Most of the students wanted to attend the course because of their interest in the issue and a desire to learn more about it. However, a few of the respondents of the course evaluation did mention that in their current study programmes gender, health and rights perspectives were lacking.

What did we learn…

We learned that what people really wanted to do was to meet with others from across the world to discuss and learn about these issues that are global and very local at the same time. Some did not read or watch all the materials, but they still came every time just to sit and discuss with others about each others thoughts and experiences from issues such as discrimination, education for girls and violence.

Currently Giulia is finishing up her PhD and Karin is working with the KI Centre for Gender Health. We are still going through the evaluations and are trying to find ways to keep the community inspired and together, perhaps through regular seminars or meetings.

In the course evaluations some people suggested doing the same materials again, but this time a lot more in-depth, others said that it would be interesting to know how to apply this to field work and focus on solutions to the issues presented. Other suggestions were to focus on violence prevention and male health: “we will take these comments with us into whatever we do next” says Giulia and Karin.

In conclusion, this was an amazing experience and almost everyone was very grateful for the opportunity to come together, learn from each other as well as from the MOOC material and the guest speakers about issues that everyone could relate to and were passionate about. Finally this would not have been possible without the institutional support from the KI Centre for Global Health and Centre for Gender Medicine or from Anne Firth Murray and Kevin Hsu.