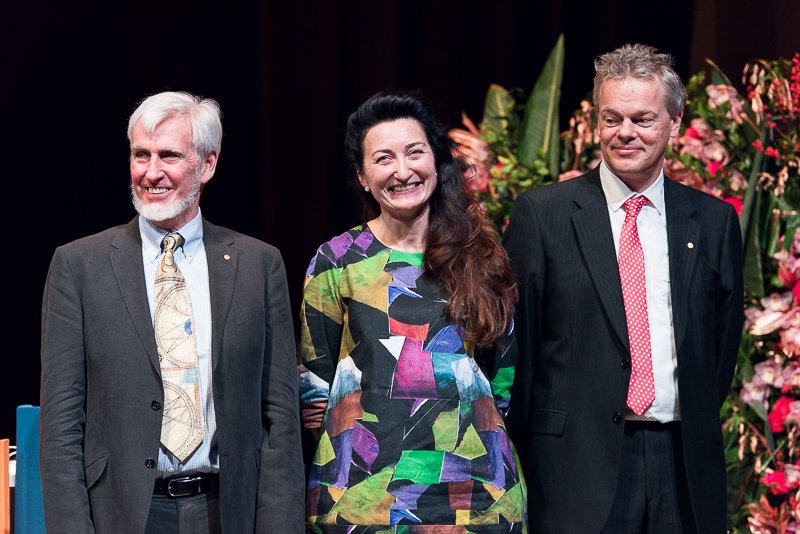 The 2014 Nobel laureates in Physiology or Medicine, John O'Keefe, May-Britt Moser and Edvard Moser, provided a mix of data old and new as well as a good few laughs at the Nobel lectures in the Karolinska Institutet auditorium on Sunday 7 December.

By eleven when Aula Medica opened, some people had already been waiting outside for an hour so as not to miss the Nobel lectures, which began two hours later. If it had not been for the red candles and a Christmas tree in the entrance, one might have forgotten it was December, given the bright sunshine and above-zero temperatures.

After more queuing indoors, where posters of the Nobel-winning discovery of the brain’s own GPS system were quickly snapped up, the members of the audience were finally able to find their places in the auditorium itself.

On welcoming everyone to the lectures, Karolinska Institutet’s vice-chancellor, Professor Anders Hamsten, handed over to Professor Hans Forssberg to introduce the three laureates.

First up was Professor John O’Keefe, who quoted a poem that he and a colleague wrote back in 1978: “Space plays a role in all our behaviour. We live in it, move through it, explore it, defend it”.

His research was about the cells that make up a positioning system in the brain: the hippocampal place cells that he himself discovered, plus other cells like the grid cells in the entorhinal cortex, that the Mosers discovered.

His lecture included data suggesting that part of the positioning system appears in neonate rats even before they have had any real sensory input from their surroundings. He also described a water maze for laboratory animals invented by a colleague to test one of his early hypotheses.

“This water maze is still the most popular and most potent test of hippocampal function available today,” he said.

Professor Edvard Moser was next, and lectured on the hexagonal patterns that the grid cells create in the brain, adding that they are also present in other, different contexts, such as the windows of Aula Medica.

“I suspect that the Nobel Committee has been planning this day for a long time,” he said, raising a chuckle from the audience, some of whom perhaps noted afterwards that it wasn’t only the exterior of the auditorium that had a hexagonal pattern, but also the floor of the foyer and the paving outside.

Professor May-Britt Moser began her lecture with a short film that also raised a peal of laughter from the audience. It was of a mouse trying to carry a biscuit up onto a platform, which she compared to a scientist trying to solve scientific problem. After many failed attempts, the mouse finally succeeded.

“Science is a field where the impossible can become possible,” she said.

She then went on to talk about how the grid cells and other cells influence the place cells, about cells in the entorhinal cortex that detect speed, and about how smells can be associated with locations.

Edvard Moser and May-Britt Moser both spent some time at John O’Keefe’s lab at the start of their careers.

“It was the most efficient learning period of my life,” said Edvard Moser during his lecture.

It is the kind of interaction that the Mosers and John O’Keefe are still engaged in to this day. During the post-lecture reception May-Britt Moser mentioned that next year John O’Keefe will be at Norway’s Teknisk‐Naturvitenskapelige Universitet in Trondheim, where the Mosers work, as a visiting professor.

And Edvard Moser said that the three of them have together invited 160 guests to a joint party in the Nobel Forum later that evening.

“This is a research field in which everyone knows each other really well, and we wanted to invite all those people who have done their bit for science,” he said. “But of course we couldn’t invite everyone to the Nobel party.”

The Nobel Laureates also visited Karolinska Institutet on December 12 for an open hearing with students and employees:

Nobel Hearing in Physiology or Medicine 2014