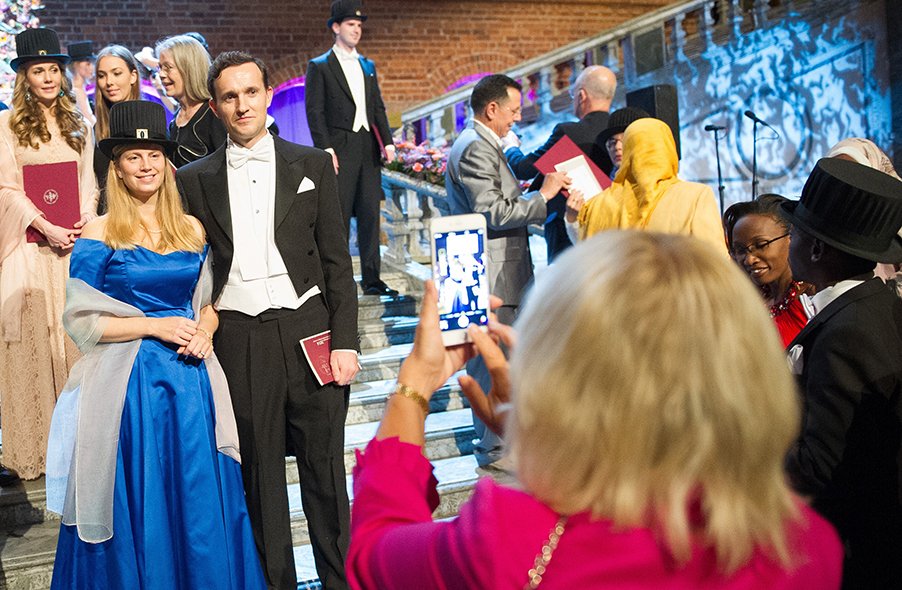 Karolinska Institutet’s new doctors of medicine, all of whom held their public defences in the spring, officially received their degrees last Friday (14 November). Tribute was also paid at the ceremony to the year’s jubilee doctors and KI awarded its Gold Medal for the first time since the bicentenary in 2010 – to university chancellor Harriet Wallberg, KI’s former president (vice-chancellor).

In the November gloom of Stockholm’s City Hall, lit only by candles that spread a warm light along the balustrade, the spotlight trained on the new doctors seemed even stronger. All 117 new doctors received their doctoral hat and diploma from Dean of Doctoral Education Anders Gustafsson, as cannon fired a salute from the City Hall waterfront to mark the end of up-to five year’s work as doctoral students and its culminating in academic theses.

Fourteen jubilee doctors, who received their degrees from Karolinska Institutet 50 years ago, were also celebrated, amongst them anti-doping specialist Professor Arne Ljungqvist, to whom the government recently decided to award a medal in recognition of his work. Vice-Chancellor Anders Hamsten expressed his sincere thanks to the jubilee doctors for their contributions to science and for having prepared the way for new generations.

Professor Hamsten also awarded Karolinska Institutet’s Gold Medal to Professor Harriet Wallberg for her “exceptional contributions” to the university. Of particular note in this regard was the fundraising campaign that she initiated during her university presidency (2004–2012) and that generated proceeds of a billion kronor for research and for Aula Medica, which opened in 2013.