Getting clockwise at the Nobel lectures 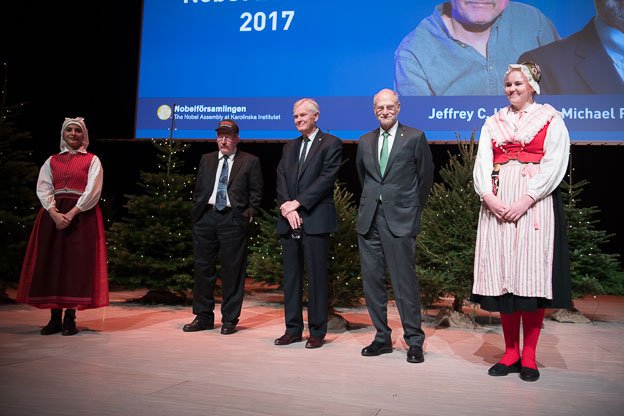 It was a packed Aula Medica that listened to Jeffrey C. Hall, Michael Rosbash and Michael W. Young as they delivered their Nobel lectures. After expressing gratitude at the attention their work has received, the trio took the audience on a scientific journey through time to role models known and unknown, fruit flies and night owls.

“I’m going to make some remarks having to do with gratitude,” said Jeffrey Hall, who, dressed in a suit and cap, held the first of the three Nobel lectures.

Karolinska Institutet’s vice-chancellor, Ole Petter Ottersen, and Professor Juleen Zierath, member of the Nobel Committee for physiology or medicine, welcomed and described the three Nobel laureates’ discoveries about the workings of our internal clock.

But Jeffrey Hall said little about his own achievements. Instead, he turned back the clock and took the audience on a journey through the family tree of scientific forebears that had made his research possible.

One invited him in to speak, as a newly-fledged researcher, at a conference in the 1970s; another was a master at discovering interesting fruit-fly variants, whose genetic descendents still dart around the researchers’ laboratories to this day. A third predecessor researched for years without publishing a word, but whose articles, when he did eventually deliver, earned him a Nobel Prize.

Jeffrey Hall also praised all unsung “AIs” (Actual Investigators), the hard-working colleagues who unlike PIs (Principal Investigators) rarely get any credit for the discoveries they help to make.

When Jeffrey Hall, Michael Rosbash and Michael Young started working together, it was a merging of personal chemistry and genetic knowledge. At last they were able to identify the genes and proteins that give our cells a circadian rhythm.

“It came out better than we intended, at least from the beginning,” said Professor Emeritus Hall.

After having raised his cap to his forerunners, he declared that this year’s Nobel Prize has two more recipients.

“One of them should be the little flies, because they have created massive amounts of biological knowledge, going back more than a hundred years of time,” he said.

He went on to claim that the phenomenon itself, biological rhythms, should also be awarded a prize, expressing his fascination at how biological systems contain tiny clocks that keep track of night and day.

“I’m done… well I am really done in life as well. If there has been any attention, I thank you for it,” he said, drawing much laughter and applause.

Michael Rosbash said that he had been speechless since 2 October, when he was notified about the prize, but assured the audience that the condition would not affect him today.

He then described how circadian rhythms are found everywhere in nature, the oldest known being found in cyanobacteria, which although they seem to have evolved independently of those in plants and animals, obey the same basic principles.

Something that had long puzzled scientists was how the feedback loop that involves a protein called Period and that gives the clock its rhythms actually works. There were many possible explanations, but Michael Rosbash had a bet with Michael Young that the regulation occurred at a genetic level. After much research, it turned out that his hypothesis was right.

“He paid his debt and we had a lovely dinner together with our wives,” he said.

It eventually transpired that the inner clock works in the same way in mammals, even if some of the components differ. We also know today that the human body contains a wide variety of time-controlled molecules, most of which seem to derive their rhythm from the basic clock mechanism described by the laureates.

“50 percent of our genes are under circadian control,” explained Professor Rosbash.

That he happened to be the one who managed to make the Nobel-winning discoveries is, he said, down to tenacity, a little knowledge and a lot of luck. He then showed the audience a list of important “rhythm and fly people” and of “yeast people”, one of whom was his wife.

"My view of science is that it is a very romantic profession - you never know what you will discover and each day is an adventure,” he said, and read a love ode to a fruit fly.

All tissues in the body contain biological clocks

Last up was Michael Young, who opened with a series of images illustrating circadian rhythms: a flower opening and closing, a hamster who is active at the same time every day, even in darkness, and a map of hundreds of time-controlled fruit fly genes.

All tissues in the body contain biological clocks that are normally set by the light. But sometimes, such as when we travel, the clocks fall out of sync which each other and their environment. They generally become reset after a while, but a defective internal clock makes some people suffer from a kind of chronic jet lag.

“We can think of these individuals as extreme night owls,” he said, and showed a graph of the fragmentary sleep pattern of an individual with delayed sleep phase disorder (DSPD).

By mapping the genes of a person with DSPD and his/her family members, Professor Young has recently demonstrated that the condition is caused by a mutation of the CRY1 gene, which destroys the clock’s sensitivity to extraneous time signals in the form of light. His subsequent studies have shown that the mutation is common.

Professor Young concluded by stating that knowledge of the internal clock gives scientists new openings into researching exactly how sleep and the circadian rhythm are connected to health.

“A variety of metabolic and psychiatric disorders are often said to be associated with disordered sleep, but it has been difficult to establish causal relationships,” he explained. “We should now be able test whether particular sleep mutations extend to other medical problems.”

The whole film with all the lectures

2017 Nobel Lectures in Physiology or Medicine

Title: The Circadian Clock, Transcriptional Feedback and the Regulation of Gene Expression

The Nobel Prize in Physiology or Medicine 2017 to Jeffrey C. Hall, Michael Rosbash and Michael W. Young
"The Nobel lectures encourage us to consider groundbreaking discoveries yet to come"