Genetics in focus at Nicholson lecture at KI 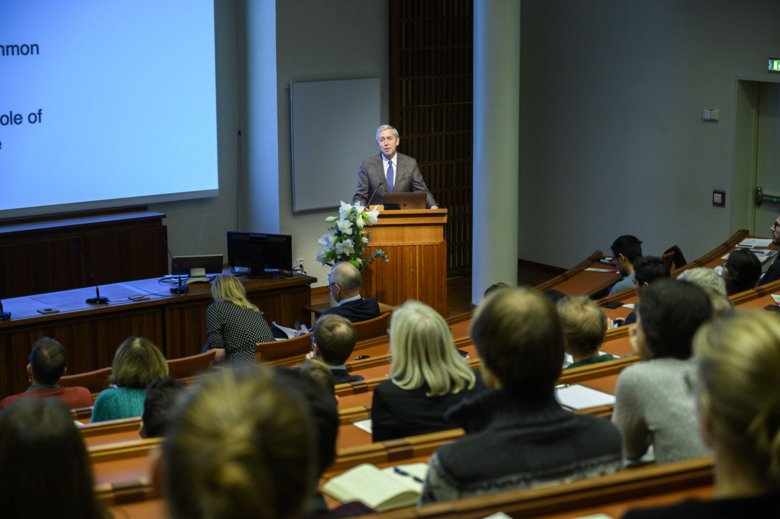 President Ottersen praised the long collaboration between Karolinska Institutet and Rockefeller University, which dates back to the 90’s. Two primary components of the KI-Rockefeller collaboration are a successful research fellowship and a postdoc exchange programme. The programme’s third part consists of two annual professors’ lectures.  To date, 18 Nicholson lectures have been held.

Professor Anna Wedell, a former Nicholson lecturer herself, introduced President Lifton. As a PhD student, Lifton identified the TATA-box, a short DNA sequence in the promoter region marking the transcription start site of a gene. During his career, he has been awarded many prestigious prizes, including the Breakthrough Prize in Life Sciences in 2014. President Lifton has pioneered the use of genetics and genomics to understand fundamental mechanisms underlying human diseases. He is most recognized for his research on hypertension and renal salt absorption, work which has informed public health efforts and therapeutic strategies worldwide.

In his Nicholson lecture entitled “From Genes and Genomes to Biology and Health”, President Lifton explained how, through the use of next-generation DNA sequencing, his group has developed methods to selectively sequence all protein-coding genes, thereby enabling exploration of various mutations.  Thus far, the results have identified well over 1000 new Mendelian loci providing novel insights on disease mechanisms affecting a range of organ systems.

Lifton spent three days at Karolinska institute and met with both researchers and students during his visit.

The lecture was recorded and will be published soon on the pages about the collaboration.