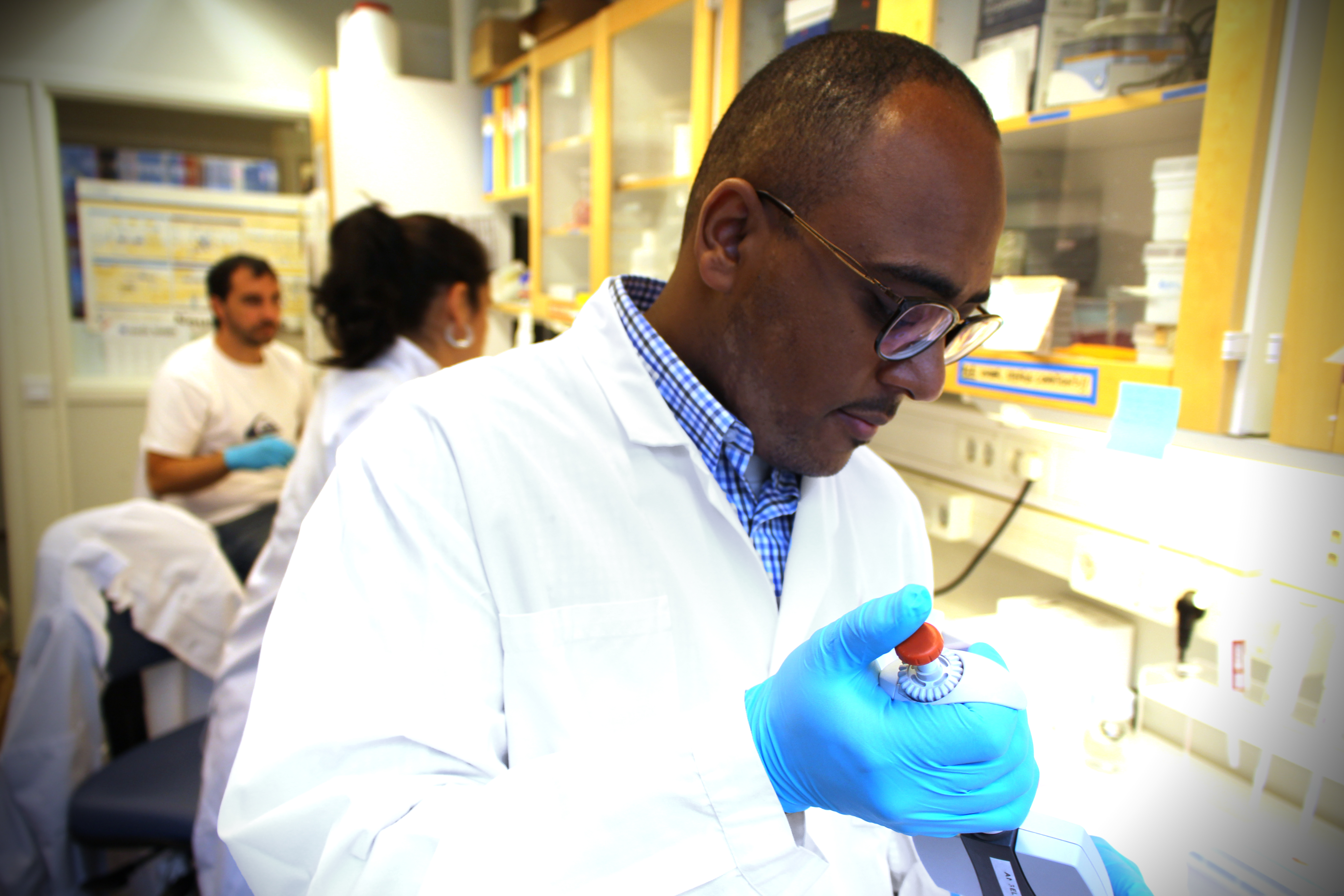 What´s the main focus of your thesis?

Well you know how high cholesterol is known to be a “bad guy” when it comes to many diseases such as hypertension (high blood pressure) and diabetes. It also has the same reputation in diseases causing the deterioration of the brain such as Alzheimer's disease. The problem is that cholesterol in the blood is blocked from entering the brain by a barrier that the brain upholds. Cholesterol circumvents this barrier by modifying itself into another form called 27-hydroxycholesterol (27-OH). This 27-OH, which mainly originates from outside the brain, has the ability to cross this brain barrier. We don’t really know that much about what this form of cholesterol does in the brain, so my thesis focuses on trying to find that out.

The brain has a system called the renin-angiotensin system. This system is similar to the one in the kidneys that controls blood pressure. Though contrary to the kidney system, the one in the brain is also involved in memory. What we found is that 27-OH causes this system to be over stimulated and as a consequence worsens memory. We discovered this in mice that are genetically engineered to have higher levels of this form of cholesterol. These mice performed worse in memory tasks than their normal siblings. We also noticed that these mice have lower amounts of glucose (a type of sugar that the brain uses for energy) in their brains.

To see if that is also true in people, we looked at individuals who had their brains scanned to measure the amounts of glucose. We also determined the levels of 27-OH in the fluid surrounding the brain, called cerebrospinal fluid, to give us a picture of how much 27-OH entered the brain barrier. What we observed was that if you have higher levels of 27-OH in the cerebrospinal fluid it is more likely you'll have less glucose in the brain. It is important to mention that these individuals also complained of some memory problems.

Another important result we uncovered is that 27-OH leads to the formation of higher amounts of a promoter of inflammation (known as S100A8) in the brain. This molecule was found to be associated with Alzheimer's disease and may have a hand in the inflammation seen in these patients.

This new knowledge allows us to understand how cholesterol affects the brain. It allows us to recognize the importance of 27-OH, its action on the brain and the role it has in propagating the negative effects of cholesterol. Currently only cholesterol is monitored in patients, however we believe that it is imperative to also measure 27-OH levels as well. While monitoring is important, what's better is to even attempt to reduce its infiltration into the brain. Within the thesis we recommend several targets that are maybe beneficial in reducing the levels of 27-OH and improve glucose metabolism. We hope this sheds light on the alternative approaches that are available in targeting neurodegeneration therapeutically.

Research is exciting because you come up with ideas that you try to prove or disprove. It really taps into your problem solving and creativity, which I love. The gratification of knowing that you’re helping people is also fantastic, however it is much delayed. It takes years or even longer to finally implement this newfound knowledge. That is why I enjoy working clinically. The interaction you have with patients and how you can influence their lives at that very moment is very pleasing. I hope to therefore get back into the clinic. Regarding doing research in the future, I think that it is complementary to the clinic. So I see no impedance in combining them, in fact that close relationship is beneficial for both areas.

Deciphering the role of 27-hydroxycholesterol in neurodegeneration