Biomedicum now shifting from building process to research itself 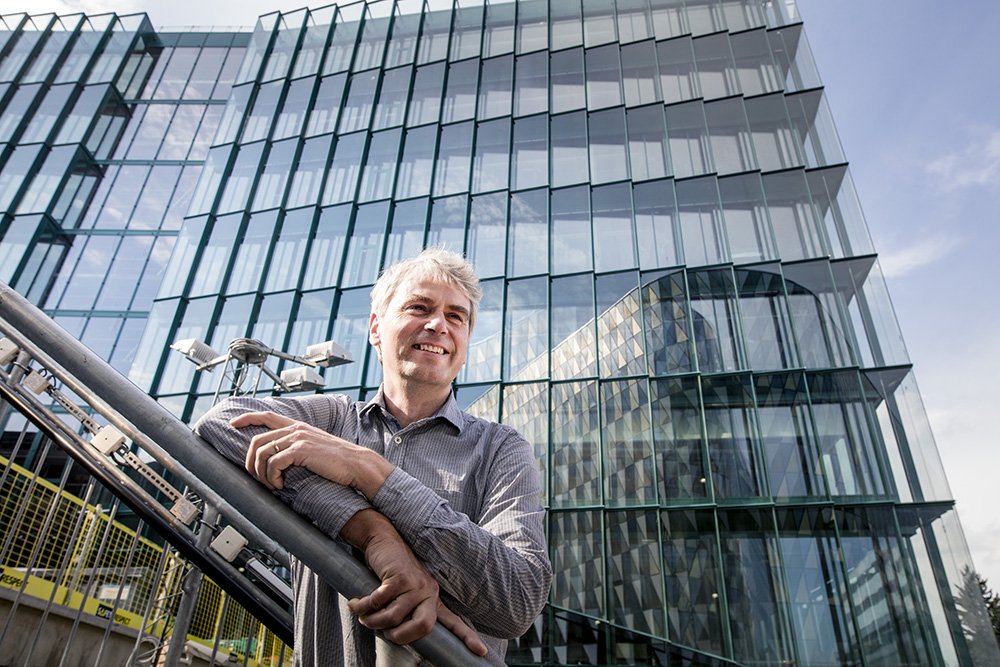 It has recently been decided where the research groups and other personnel are to be placed in Biomedicum, the new research lab on Karolinska Institutet’s Solna campus, which is scheduled for completion in 2018. The focus can now shift from the building process and placement of research groups to the research itself, says Pontus Aspenström, who chairs Biomedicum’s Chairpersons’ Team.

Only a narrow passage separates Biomedicum and Aula Medica, which stand shoulder-to-shoulder on the Solnavägen side of the campus. It is here that Pontus Aspenström talks about the project in which he has been involved since the start five years ago. He was once a vocal advocate for the researchers, but since 1 June has been chairing Biomedicum’s Chairpersons’ Group. For six months he will have overall responsibly for making sure that things get done according to plan before relinquishing the rotating chair to his successor.

“You really have to think, ‘How can we do this as well as possible for as many as possible?’” he says. “It might not appeal a hundred per cent to everyone but we’ve tried to minimise the pitfalls. We can’t afford to trip up now that we’re so close.”

As one aspect of the preparations, the researchers from the five departments set to occupy Biomedicum were asked to state their needs as regards infrastructure and lab equipment, as well as which groups they would like to be placed in close proximity to.

“We’ve recently been planning very actively and tried to bring all the groups into line with each other to make sure that all departments and researchers are happy before the big move,” explains Professor Aspenström. “Now that this has been decided, everyone will be meeting to discuss and sort out how they want to optimise their local environments.”

One of the concepts for the building is the “indoor park” idea. By constructing verdant environments, the building will compensate for the shrubbery and trees that occupied the site before building commenced.

“I think it’ll be pretty awesome,” says Professor Aspenström. “It’ll be something new in contrast with the old, classic KI.”

There will also be a lot of shared space and ‘alleyways’ between the previously segregated departments in order to help bring people together.

“It’s a pretty theory, but we really hope that it’ll work out in practice too.”

The focus is now shifting from the building process and placement of research groups to the actual research.

There are already joint activities in place and the first scientific conference for Biomedicum is scheduled for 21 October.

“It’s now in our and the researchers’ hands to do the world-leading research that we’re actually here to do,” says Professor Aspenström.

A longer article appeared in KI Bladet 4/2016 (in Swedish only).

Biomedicum in brief
Biomedicum will bring together much of the experimental research conducted on Karolinska Institutet’s Solna campus under one and the same roof. Since the laboratory equipment is both advanced and costly, it must be possible for more than one group to use it. The aim is to encourage fruitful collaborations between research groups in both basic and clinical research. Construction started in 2013, with occupancy scheduled for 2018.