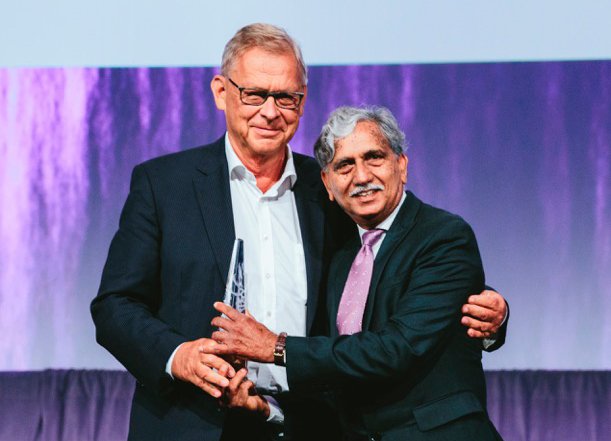 The awards were presented during the opening session at the Alzheimer’s Association International Conference 2016 in Toronto, Canada. Professor Bengt Winblad was one of three leading scientists to be recognized for their contributions to advancing Alzheimer’s disease and dementia research.

The awards honor individuals who have made significant fundamental contributions to Alzheimer’s research, either through a single scientific discovery or a body of work. The contributions, whether in research, leadership or mentorship, must have a lasting impact on the field and demonstrate a lifetime commitment towards progress against Alzheimer’s and dementia.

“These three scientists have made invaluable contributions in advancing the field of Alzheimer’s disease and dementia research,” said Maria C. Carrillo, Ph.D., chief science officer for the Alzheimer’s Association. “While their specific individual investigations vary, they share a common commitment to improving the lives of people living with Alzheimer’s and other dementias, and leading the way to a world without Alzheimer’s. We honor them for their passion, leadership and dedication.”

For further information on the awardees, please visit: https://www.alz.org/aaic/releases_2016/awards-lifetime-acheivement.asp

Bengt Winblad, M.D., Ph.D., Professor of Geriatric Medicine and co-head of the Clinical Trial Unit at the Karolinska University Hospital, Huddinge, Sweden. Winblad is Head of the Division of Neurogeriatrics at Karolinska Institutet, and Director of the Swedish Brain Power research network. Recognized in 2009 as the world’s most prolific researcher in the Alzheimer’s field, Dr. Winblad’s contributions in advancing Alzheimer’s and dementia research have been invaluable. He was a member of the Nobel Assembly for physiology and medicine 1989-2008. His research interests focus on the epidemiology, genetics and treatment of dementia conditions in Alzheimer’s. In addition to authoring more than 1,000 publications in the field, Dr. Winblad has tutored more than 150 Ph.D. students. He is chair of the European Alzheimer Disease Consortium (EADC) and former chair of the Medical Scientific Advisory Panel of Alzheimer Disease International.