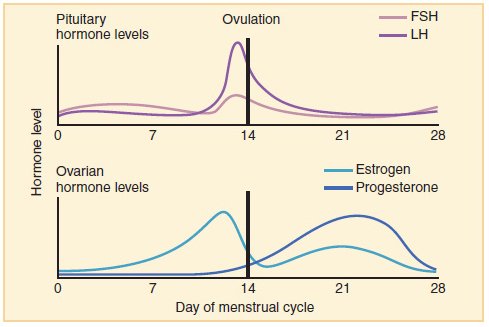 Summary of hundreds of research articles on sex&gender medicine reveal a regulation of the woman's immune system by sex hormones, and may justify why female are more vulnerable to reproductive tract infection than males.

This week, researchers from the Geisel School of Medicine in New Hampshire (USA) suggested the reason for women increased risk to sexually transmitted infection (STIs) may be due to their sex hormones.

Women are at greater risk of STIs than men. In 2012, the world incidence of ovarian, uterine and cervical cancer hit the million cases, with Human Papillomavirus (HPV) being the leading cause. By the WHO numbers, half a billion new cases of STIs were registered in 2008. Of these, the prevalence for C. trachomatis, N. gonorrhoeae and T. vaginalis infections are higher in women than in men. Two out of three new HIV infections in Sub-Saharan Africa are women, and in the Western World genital herpes infect one every five women, compare to one every ten men.

In face of this disparity between male and female, Charles R. Wira, Marta Rodriguez-Garcia and Mickey V. Patel were invited by Nature to write a review on the influence of sex hormones on the immune system, in particular the ability of oestrogen and progesterone to change the Female Reproductive Tract (FRT) immune defence.

At the closing of the review, the authors suggest that modulation of the immune system by sex hormones may be to blame for the difference in STIs susceptibility that interest women.

The ~28-day ovarian cycle is controlled by the oestradiol (OE2) and progesterone (P4) secreted by the FRT. By the end of menses (day 3-5), a proliferative phase begin, with the production of OE2 by the ovary, which accumulates and drastically drops at the time of ovulation (day 14). After ovulation, both P4 and OE2 increase steadily during a secretory phase, and again slowly decline in the absence of fertilisation. By day 28, oestrogen and progesterone levels reach a lowest, and menstruation occurs.

Because OE2 and P4 can impact the immune ecosystem of the FRT, researchers in the review propose that a ‘window-of-vulnerability’ may affect womens at specific time of their cycle.

A primary barrier against invading pathogens like fungus and viruses is the epithelium, the first layer of cells in contact with the environment. Tight junction proteins control the tightness of the epithelium, and make sure the underlined tissue is locked away from intruders.

It turns out that OE2 modulates the expression of tight junction proteins, and leads to the relaxation of the barrier. Giving that tight junctions are a known targets of pathogens, it is feasible that the hormonal-controlled relaxation may enhance susceptibility to STIs. Whether the fluctuation of tissue permeability across the menstrual cycle associates to increased infection rate has not been investigated yet.

Another line of defence against infections are the white cells that live below the epithelium, and they also are influenced by hormones. Under the influence of P4, immune cells in the upper tract increases in number in the secretory phase.

Because of ovulation, new blood vessels form in the uterus in preparation for the implantation of the egg. This gives the chance to NK cells, macrophages and neutrophils to accumulate at the tissue during this phase of the cycle, attracted by chemokines produced by the FRT under the control of sex hormones.

Oestrogen also modulates the production of antimicrobial peptides, proteins produced by epithelial cells to clear microbes. At fertilisation time (during the secretory phase) OE2 increases the production of antimicrobial peptides of the epithelial cells around the oocyte, but decreases their production in the lower tract. This allows the microbes to move away from the egg, colonising another area of the FRT.

The ability of sex hormones to control the immune system in the FRT is a remarkable example of fine-tuning of human defence, and many more examples may be found in the review. But why is this happening?

The immune system in the FRT is regulated by hormones throughout the menstrual cycle to maintain a fine equilibrium: on one side, the immune system needs to effectively fight infections, on the other, it requires tolerance, immune regulation and tissue remodelling for a successful implantation of the egg and initiation of pregnancy.

In the uterus, the immune system must distinguish between the ‘foreigner placenta’ (the genetic makeup of which is different from the one of the woman) and opportunistic pathogens. The cost for this decision-making process - the authors suggest - may be the increased risk for STIs under a certain period of the menstrual cycle.

Evidence supporting this view are few but accumulating, yet not conclusive

‘By examining the immunological parameters in the upper and lower reproductive tract’ the authors says ‘we hypothesise that during the secretory phase of the menstrual cycle there is a period of 7-10 days [...] during which important components of the women immunity are regulated by OE2 and P4 in a manner that limits their response to STIs’.

This concept is supported by preclinical research using different models. In non-human primate, HIV delivered vaginally seems more likely to produce infection during the late secretory phase of the cycle, and in ex-vivo human cervical explants, tissue collected in secretory phase is again more permissive of HIV infection than in proliferative phase. Similarly to high-primates, mice treated with OE2 are protected from Herpes Simplex Virus, while P4 makes them highly susceptible to the virus. Collectively, many models support a protective role of OE2 against viruses, leaving the secretory phase (low in OE2) as ‘window-of-vulnerability’. Yet a definitive evidence for this phenomenon in women remains to be shown.

To conclude, although the exact mechanisms responsible for infection in female reproductive tract may vary with animal and cell models, ‘it is evident’ the author says ‘that the window-of-vulnerability provides a useful concept from which to examine the pathogens that compromise the lives of women worldwide’.

This review is another important step towards gender-oriented, personalised medical research.