A Month for Women’s Health 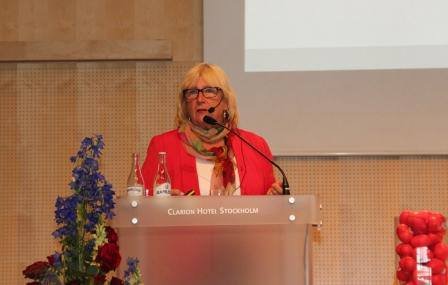 Following a US initiative, Sweden dedicates March to fight against sex and gender bias in medical practice and research. For the whole month, dozens of cities will engage in a charity effort to raise awareness (and money) for gender medicine. Nothing would be possible without the initiator of the campaign, and Founder of KI's Centre for Gender Medicine, Prof. Karin Schenck Gustafsson.

The most common cause of death among Swedish women is cardiovascular disease. Yet, most of the medical research performed on the heart and other biomedical problems have been generated on male patients or male animal models. Today, we know far too little about female heart health and biology, and textbooks are filled with notions that derive primarily from male physiology. These are some of the points made in Svenska Dagbladet's article that came out sunday the 8th of March, the International Womans Day and that make the KI Centre for Gender Medicine so proud of its work!

To raise money for research and engage the public on the problem of sex bias in the medical practice, the NGO 1.6 million club - together with partners - organises the Woman in Red campaign, a month of activities dedicated to women health. The charity kicks off in the city of Stockholm, and spread to 17 cities in Sweden for the month of March.

At the opening ceremony, on Tuesday 4th of March, the association hosted a Gala evening at Oscarsteatern (Stockholm) where show and science meet on stage, and which proceeds will go to support gender-based research.

Prof. Karin Schenck Gustafsson was a special guest at the Gala. She is Professor in Cardiology at Karolinska Institute, and chair of the Women and Health Foundation, one of the organisations behind ‘Woman in Red’. Prof. Schenck-Gustafsson has been hugely influential in introducing sex and gender aspects in cardiology in Sweden, and she has made substantial contributions in the field internationally. Among her numerous initiative, she founded the Centre of Gender Medicine at Karolinska Institutet in 2001.

R: Karin, how did you get the idea to begin the Women in Red campaign in Sweden?

K: A similar initiative was already running in United State years before. I was at a congress at American College of Cardiology in Florida, in 2004, where I met many female cardiologists who have just started the charity “Go Red for Women”. At the time, the initiative was directed by the Cardiology College and the American Heart Association. In few years, it became one of the biggest women-tailored health campaign, and today it is lead by the World Heart Foundation, an international coalition that fight cardiovascular diseases. After that congress, I returned to Sweden and started a similar movement in 2006. At the beginning, we were three associations: the Swedish Heart and Lung Foundation, the Swedish Society of Cardiology and the 1.6 million club. Likely for us, the public attention to the charity grew rapidly, and we left the entire campaign to the 1.6 million club, which does an incredible job every March. Via the Foundation Women and Health, we gave out this year 1.250 million SEK as scholarships for research about cardiovascular disease in women.

R: You are also one of the founding board member of 1.6 million club. How did everything started?

K: I was giving a talk to the Swedish Medical Society about gender bias in cardiovascular medicine. Together with me, there was also gynecology Professor Britt-Marie Landgren (KI), and in the audience - listening carefully - entrepreneur Alexandra Charles. At the end of the conference, Alexandra walked up to me and said that it was time to fight back the male-dominated business that seemed medicine. The 1.6 million club was founded in 1988, and it is named after the number of women over 45-years of age at the time in Sweden. We founded the club to disseminate health information to the public from a female perspective. Today the club also have also younger members, the 2.6 million club.

Today, the club is Sweden´s largest women organization, with 35.000 members. Thanks to the 1.6 million club and the generous contribution of all its members and volunteers, nearly three million SEK (€320k) have been distributed to 20 scientists working in Sweden since 2011.

R: You the founder of the Centre for Gender Medicine at KI, back in 2001. Why did you think that it was necessary to create such Centre?

K: I worked as cardiologist for many years. Before becoming head of the Coronary Care Unit at Karolinska University Hospital, I learned from textbook that myocardial infarction was a male disease. I then looked at my patients, and see that half of them were women! I realised immediately how biased cardiology was. For this reason, I decided to create the Centre. The initiative started by bedside clinic. I begin research in the ‘90s about women physiology and medicine and the Centre started a bit later. At that time, there was a big movement in the United State - and NIH in particular - which spread to politician and shaped the field of cardiology towards the right direction. We see something similar also today, though on pre-clinical research.

R: Did you experience any initial resistance about the CfGM?

K: Yes, of course: this is part of the game. There was no resistance from the community and the patients, but a lot of skepticism in my environment, at the thoracic surgery unit. “Why doing research in women, when it is the same condition?” they would say. Or “men live shorter than women, why focusing on them?”. I am so happy to see how much has changed. The surgery units are now very aware of the issue, also because our patients ask what is the risk for a women to have a bypass, or for a man the complications to a heart surgery. Cardiology is much better these days. It is a pity that our efforts were mostly seen as political at the beginning, and not as genuine scientific efforts.

R: Do you think that the CfGM has still a role in making everyone aware of the importance in sex and gender difference in science?

K: I think the Centre for Gender Medicine has helped to make a change in Sweden and abroad. Things have become better, especially in cardiology. We acknowledge that myocardial infarction is different, heart failure is different and arrhythmia in different between men and women. The more we study this, the more we find fundamental biological differences which could inform future treatments. But there is still much to do. The awareness is still very low in some circles, and many medical and pre-clinical practitioners do not take into account sex and gender in their work. The CfGM can praise itself to have inserted into the medical curricula lectures about biology of sex differences. This is a first step towards a bigger mentality change, but is not an easy task, and it takes time. I really wish we could be more influential towards the pre-clinical research: few female animals or cells are included in studies, and worse people do not report their sex in the literature.

R: What would you suggest to a young scientist or MD who today would like to undertake a more serious attitude towards Gender Medicine?

K: Young people should look at the map of the disease they work with, and see if women and men get it differently. If they find no information about it, it may be time to make a study where the risk and the incidence and the symptoms of that disease get reported by sex. Why men get more schizophrenia and women lupus disease? We need your brains to gather more knowledge on the mechanisms behind this difference, and hint towards a sex-tailored treatment.