2014 Nobel prize winners: “It was a wonderful moment“ 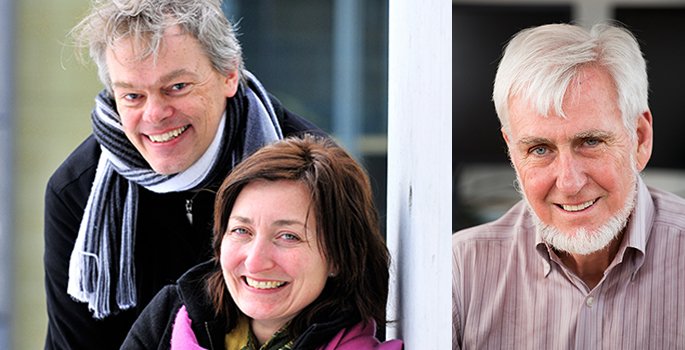 Fantastic! A shock! One of the best things that’s ever happened to me! When John O’Keefe, May-Britt Moser and Edvard Moser are asked how it felt to win this year’s Nobel Prize in Physiology or Medicine, they all gush with joy and surprise.

“It’s the most prestigious award a scientist can receive,” says John O’Keefe, professor of cognitive neuroscience at University College London, UK, who discovered the positioning cells that earned him the 2014 Nobel Prize in Physiology or Medicine.

By registering neuronal activity in the brains of free-roaming rats, he found that certain cells of the hippocampus were activated when the rat was in a particular location.

“It was a wonderful moment when I saw the correlation,” he says. “A vast amount of literature, written over thousands of years, has tried to come to grips with the problem of understanding the connection between the space we experience and the physical world.”

John O’Keefe was one of the first scientists to register the activity of individual nerve cells in free-roaming animals, and says that new techniques that reveal new things are behind many important scientific breakthroughs, and that he would like to see more such research in the future.

“We must get better at giving researchers, particularly junior ones, the freedom to explore using new techniques and new ideas, and sometimes to make mistakes without feeling the pressure of having to publish articles in respected journals,” he says.

He adds that breakthroughs can also only occur when the scientist understands that he or she has discovered something important. His fellow laureates, May-Britt and Edvard Moser, both professors of neuroscience at Norway’s Teknisk‐Naturvitenskapelige Universitet in Trondheim, agree:

“John O’Keefe and we made our discoveries in similar ways: we saw something that we hadn’t been expecting, and continued to study it, and in both cases it was a combination of luck and a readiness to handle the unexpected,” says Professor Edvard Moser, adding that courage, patience, creativity and the ability to focus on the right questions are also crucial to scientific success.

He and May-Britt Moser discovered the so-called grid cells in the entorhinal cortex, a part of the brain close to the hippocampus, after observing that these cells not only were activated when a rat passed by a certain point in its environment but also that they gave off a signal when it was at nearby locations.

“At first we suspected a regular pattern, but when the rats were allowed to roam over a larger area, a hexagonal grid emerged,” says Professor May-Britt Moser. “A special neuron was activated when a rat passed one of the points of a hexagon. What’s fascinating is that nothing in the rat’s environment had this shape. The pattern is one of a very few known to be created by the brain itself.”

The grid cells, the place cells and other cells that indicate head orientation, speed of movement and nearby obstacles are part of a system that probably exists in all mammals and that functions as an internal GPS. The system also plays an important part in how we create memories.

John O’Keefe first met May-Britt and Edvard Moser when they were doctoral students at Oslo University in Norway.

“I could tell right away that these two would become stars in the world of science, and was happy when they then asked to come to my lab to learn our techniques,” he says. “They turned out to be two of fastest learners I’ve ever supervised. Today, we’re not just colleagues interested in the same part of the brain, but very good friends too.”

May-Britt and Edvard Moser describe John O’Keefe as a mentor, who taught them, amongst many other things, about the importance of maintaining a high level of quality in their research to ensure that it is reliable and replicable.

“Excellent research must be excellent every step of the way, and this takes efficient research teams and healthy, happy laboratory animals,” says May-Britt Moser.

When asked how their research will benefit humankind, all three laureates mention Alzheimer’s disease.

“The disease onsets with lesions in the part of the brain where these cells are fond, and some of the first symptoms are an impaired positional sense and an impaired memory,” says Edvard Moser. “Since the disease develops very slowly, it might be possible to stop it if we can find out what’s going wrong. But first, we have to understand how the normal brain works.”

He and May-Britt Moser are now focusing on finding out how all cell types in the advanced positional system interact, and on trying to understand how the grid pattern arises.

“The brain is complex but conservative, and often uses the same trick again and again,” says Edvard Moser. “Maybe we can learn something about completely different cognitive functions as well.”

They are also, he continues, both interested in understanding how the positional system integrates with motor cells.

Lot to learn from KI

“I should think there’s a lot here to learn from Karolinska Institutet, where a lot of research is going on about how the brain controls movement and takes us from A to B.”

John O’Keefe plans to continue his work on the hippocampus, but has also started to take an interest in the amygdala, part of the brain that belongs to the limbic system.

“I’m driven in my research by curiosity, and go to the lab every day in the hope of finding something new and, ideally, important,” he says. “As I mentioned before, new technologies can pave the way for new discoveries, and right now we’re planning to develop methods for registering electric signals from thousands of nerve cells at once.”

All three agree that the Nobel Prize is a hallmark of quality. While May-Britt Moser hopes that the prize will also boost the recruitment of top researchers to her and her husband’s groups, John O’Keefe is more sceptical about the effect.

“Maybe it’ll be easier to get research grants, but then again it could also be harder,” he says with a laugh.

John O’Keefe was born in 1939 in New York City, USA, and is both a US and British citizen. After earning his PhD in physiological psychology in 1967 at McGill University in Montreal, Canada, he moved to England to research at University College London, where he was appointed professor of cognitive neuroscience in 1987. John O’Keefe is currently head of the Sainsbury Wellcome Centre for Neural Circuits and Behaviour at the same university.
May‐Britt and Edvard Moser were both born in Norway, she in 1963 and he in 1962. They studied psychology at Oslo University and took their PhDs in neurophysiology in 1995, after which they did their postdoc research at the University of Edinburgh and with John O’Keefe at University College London. In 1996 they returned to Norway and established a research laboratory at the Teknisk‐Naturvitenskapelige Universitet in Trondheim. Edvard Moser was made professor of neuroscience in 1998, and May‐Britt Moser in 2000. May-Britt Moser is currently director of the university’s Centre for Neural Computation and Edvard Moser of the Kavli Institute for Systems Neuroscience in Trondheim.

Nobel Lectures in Physiology or Medicine 2014, December 7 at Karolinska Institutet